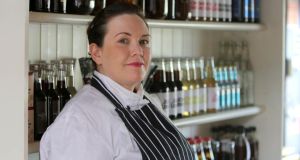 Jess Murphy of Kai Restaurant in Galway: will be part of Massimo Bottura’s Refettorio Felix project in London using surplus food from supermarkets to cook at a drop-in centre for the homeless. Photograph: Hany Marzouk

The flashiest restaurant that chef Jess Murphy ever walked into was a soup kitchen in Milan. It was Refettorio Ambrosiano set up by chef Massimo Bottura and she was a guest chef there two years ago cooking waste food from Milan Expo. “It was beautiful. The gelato machine was like a Ferrari. It made gelato in 12 minutes.”

But foraging for ingredients meant jumping from a loading platform on to the back of a truck packed with random leftovers. “You can’t just grab everything because that truck is going on to 10 other soup kitchens. So you have to jump on the truck and think very clearly.”

“I found smoked Albacore tuna, really crazy stuff. And then I found maybe 100 packets of hamburgers that Dave [her husband] spent two hours cutting open and putting [the meat] in a bowl again. It was the bizarrest way of cooking cause you’re looking up and ‘oh my god there’s Massimo Bottura there and I’m cutting open hamburgers.’ He was like, ‘what are you making?’ and I said ‘meatballs’ and you’re laughing to yourself because it’s so surreal.”

Killing pigs and saving blood and boiling cast-iron baths. Life and death is all natural to me and death isn’t a scary thing”

Murphy is funny. She wisecracks she’s the only person in Galway not in that Ed Sheeran video clocking up close to 60 million views. “I’ve been lying to everyone, going ‘that’s my arm in O’Connells’ and they were all like ‘Stop trying to steal our thunder.’”

This month she will be part of Bottura’s Refettorio Felix project in London guesting among a starry line-up of chefs, including Alain Ducasse, Angela Hartnett, Clare Smyth, Daniel Boulud and Jason Atherton using surplus food from supermarkets to cook at a drop-in centre for homeless people in Earl’s Court. On June 20th, Murphy will cook alongside fellow Kiwi Anna Hansen, chef owner of The Modern Pantry. The two women met in Barcelona at this year’s Parabere forum on women in food and decided to collaborate. “I’d kinda stalked her for a long time. I’ve been a massive fan ever since I came over this side of the world, between Peter Gordon and Anna Hansen. They were heroes of mine growing up in New Zealand. ”

Murphy grew up in a small town called Wairoa, “killing pigs and saving blood and boiling cast-iron baths. Life and death is all natural to me and death isn’t a scary thing.” It was a great preparation for restaurant life. Eating food out of season wasn’t an option. “A kilo of tomatoes out of season in New Zealand is like $24 so whenever you had a glut you worked your arse off. Mum still breaks down 25 kilos of walnuts every year and then dries them out in the sun . . . Same with the passion fruit she’s growing at home because you just don’t waste anything.”

Did cooking with waste food change her attitude to waste in her Galway restaurant Kai? “It made me look at things, realise how important it is to maybe send your chefs out to dig spuds and dig cabbages and carry water to actually water them, because the cabbage sitting in a cool room doesn’t have a face.”

It’s hard to find chefs and chefs leave because they say ‘I followed you on Instagram for eight months and it looks like you have a perfect life.’ But you don’t because it’s f*ckin’ Instagram”

Veg trimmings don’t just go in the stock pot. She’s made curry using the outer leaves and stalks from cauliflowers.

But more than lessons about food, the project taught her about people. “The real connection for me was actually feeding the people and seeing them, their dignity.” In Milan diners didn’t have to queue for their food they sat at tables and were served. They had a choice of still or sparkling water. The toilets had sinks big enough for people to have a sink wash. “Dignity doesn’t have to be giving somebody something. Dignity is giving somebody five minutes of your time, [saying] ‘how are you doing?’, ‘are you okay?’”

Later this year she’ll help put on another Athrú conference to discuss the issues women face in kitchens. They’ll be in the Druid Theatre in November, and she wants to make it practical and fun. It’s her thing. That and being unafraid to call out unfairness and ego-driven nonsense. There is a spectrum that goes from the bad old days of kitchens, the reality of restaurant work today and the filtered food lives we live online. Murphy has lived all three. “Back in the day that’s the way it was. Kitchens were kind of violent and that’s just the way it was and we knew going into that what that was like. There was no pink cloud of a millennial illusion that it’s going to be an Instagram account. That’s why it’s hard to find chefs and chefs leave because they say ‘I followed you on Instagram for eight months and it looks like you have a perfect life’ But you don’t because it’s f*ckin’ Instagram. You can filter the shit out of it. I got a few alpine strawberries the other day and I put them on Instagram and on the menu on Friday and I sold out. And that’s Instagram. We have to be just a little bit real as well.”

Over-competition in sport is bad for children’s mental health