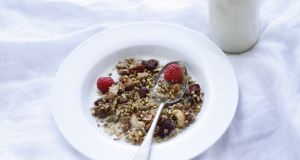 For the Love of Gránola

Tara-Lee Byrne has an unusual career profile, being both a touring and performing cellist and a raw and wholefood chef, as well as a yogi. She has worked as a chef at yoga retreats and wellness centres in India, Asia and Australia and now lives in Killaloe, Co Clare, where she produces a range of Wicked Wholefoods, including For the Love of Gránola.

Having gone through the SuperValu Food Academy, this product is now stocked nationwide in that supermarket as well as in independent food and health-food shops. The buckwheat, fig, cashew and cranberry granola is gluten-free, while the almond, brazil, cashew, coconut one ticks a lot of “free-from” boxes, but has gluten.

Byrne sources her ethically produced spices from Goa, and the granola is baked in the west of Ireland with raw organic virgin coconut oil. As well as 400g pouches of granola, in both GF and non-GF varieties, Byrne has had the clever idea of selling single-serve 35g pouches, for use on the go. The large packs cost from €6.95 and the single serve are €1.75. For recipe ideas, and an online shop coming soon, see wickedwholefoods.com

Food festival activity moves this weekend to Cong, Co Mayo, which runs until Monday, June 5th. One of the features of this community-run festival is the schools cabbage growing competition. More than 200 pupils were given cabbage plants to cultivate, and on Saturday, June 3rd, they will present them for judging.

Another popular event is the Ready, Steady, Cook challenge (June 3rd, 4pm), which pits Philippe Farineau, head chef at Ashford Castle, against Jonathan Keane, head chef at Wilde’s at The Lodge. The two will cook two dishes each from a basket of mystery ingredients, in the festival marquee, and the audience will decide the winner.

On the final night of the Cong Food Village festival, chef Wade Murphy, now co-proprietor with his wife Elaine of 1826 restaurant in Adare, Co Limerick, will return to his old haunt, The Lodge at Ashford Castle, where he was head chef from 2007 to 2010. Murphy will cook alongside Jonathan Keane, current head chef at Wilde’s at The Lodge. Tickets for the five-course menu are still available, at €70 each (booking on 094-9545400). congfoodvillage.com for more details.

The four Irish businesses that have won the opportunity to market their product, free of charge, to more than 34,000 visitors at Taste of Dublin in Iveagh Gardens on June 15th-18th have been announced.

Exhibiting on the Bank of Ireland-sponsored Producers Row will be Flavour Safari, makers of African-inspired sauces in Co Laois; Mama Nagi’s Indian chilli pastes made in Dublin; Cabots of Westport, with a range of handmade hummus, sauces, pâtés and dips, and O’Brien’s Farmhouse Cheese, from Limerick.

The four food businesses were successful after 3,500 responses were received in a public vote.

The Terrace at Clontarf Castle Hotel in Dublin 3 is a useful addition to the capital’s hot spots for outdoor eating that become so sought-after when the sun shows its face. It’s a group dining experience only, for a minimum of 30 guests, but for that you’ll have exclusive use of the terrace and a lavish barbecue feast prepared by executive chef Stuart Heeney and his team. Summer barbecue packages are available from €29 per person and it is the sort of spot that would be ideal for family parties, with space for children to join the fun without being cooped up indoors. The Terrace is also used as an outdoor dining space for Knight’s Bar at the castle. clontarfcastle.ie