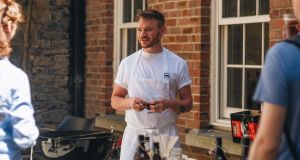 Niall Davidson, chef patron at Nuala, London, who will be cooking at Meatopia at the Guinness Open Gate Brewery later this week, will be opening a restaurant in Dublin next spring.

Niall Davidson of Nuala restaurant and Irish bar in London’s Shoreditch, where ingredients indigenous to the British Isles are cooked over a wood fire, is opening a new restaurant in Dublin 2 next spring. It will serve Irish produce, cooked over fire and served at a counter.

Davidson’s number two in the Dublin restaurant will be Hugh Higgins, former head chef at Luna.

The as yet unnamed 35-40 seat restaurant will be part of Trinity Townhouse, a 25-bedroom boutique hotel on South Frederick Street. But it will operate separately from the hotel, which is being developed by a Singaporean hotelier friend of Davidson’s.

The Scottish-born chef, who was raised on a farm in Derry from early childhood, will retain his interest in Nuala, where the kitchen is in the hands of Niall Aird, formerly head chef at L’Ecrivain.

“Nuala has a good team [in place], so I’m probably going to take a good step back from it,” Davidson says. He will be moving to live in Dublin and says he is looking forward to coming home. “I find Dublin a super exciting city at the moment.”

The restaurant will primarily serve diners at a counter set at a higher level that the open kitchen it will surround, “so when you’re chatting to the chef you’re at eye level”, Davidson says. There will also be a private dining room.

“Counter dining works very well, it’s kind of informal, but you can still get blown away by nice cooking, nice service, everything cooked to order, very seasonal, and changing menus all the time.”

He describes the food he is planning as “super tasty Irish grub cooked over a fire”. Similar to Nuala, then? “Probably a bit more refined, if I’m honest, because we will only do 60 covers a night, max.”

Nuala, which is named after Davidson’s younger sister, has 80 seats and regularly does 120-plus covers a night. The downsizing is intentional. “It’s quite refreshing, in London it’s all big business. I honestly burnt myself out when I was doing Nuala,” he says. He previously worked at Chiltern Firehouse and St John Bread & Wine.

Irish ingredients will be the basis of the menu in Dublin. “People in Ireland are waking up to what’s on their doorstep, and there is so much great produce here.” The plans include building a very large larder to accommodate “a big cured meat programme and a big fermentation programme”.

“We are going to champion Irish ingredients. I know it’s quite cliched to say ‘oh let’s get everything from Ireland’, but I want to do that.”

He has one singular ambition for his next restaurant: “You just want to put a smile on people’s faces.”