Review: It has been around in Sandycove since God was a girl. Not much has changed 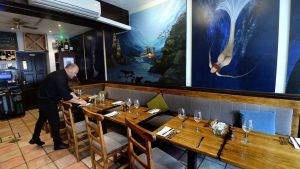 It was a smell that brought me here. Our neighbourhood is full of them: biscuity beery burps from St James’s Gate, a Teelings whiskey tang you could almost chew and occasionally the smell of the drink that is the sea. Maybe the gulls bring it, or the Liffey when the wind is right. But a waft of waves has brought me to Cavistons in Glasthule for lunch. Monkey smell, monkey do.

Cavistons have been doing fish and seafood since God was a girl and are as much a part of the south Dublin landscape as deck shoes and pressed chino shorts. I’ve never been through the door till today and (weirdly, because he’s even more of a fish fanatic) neither has my dad. We’ve gone for the late lunch sitting – they come in 90-minute shifts like short-hop ferries.

The small tables are pine, varnished to a toffee brown to go with the wood panelling on the wall. There is an orange-tiled floor and then there’s the artwork. Big brooding panels of scenes from the deep line one wall in the small room. Directly opposite us is a mermaid that verges on creepy. When you find yourself in a discussion with your dad about whether mermaids’ scales go all the way up to their waists, it’s time to wonder if the look might just have had its day.

Nothing to scare the horses

There’s nothing to scare the horses on the menu. It’s a list of fish and seafood dishes where the main idea is the fish and seafood rather than any added cheffery. Like tides, trends come and they go, this menu says. Change might be whistling by outside the door and some Johnnie come latelies might be putting fish and seafood front and centre but inside these walls the clock ticks slow and steady.

It’s not that there’s nothing new. There is hummus, a tiny pot of it, nice and cumin-laced with fruity white bread and one made with chewy dried tomatoes. But the sardines don’t come with samphire or sourdough, just a juicy lemon and a sprinkling of rock salt, their skins flayed crispy and their heads on. There’s a plate of good smoked salmon, soft and sweet rather than the oily shoe leather this once-rare treat has become in the hands of the supermarkets and sandwich bars. There are juicy capers and pea shoots that taste properly of peas on top of the salmon.

The mains have a dinner-in-the-middle-of-the-day feel (and price tag) to them. I have a tumble of seared scallops. The word “seared” makes me think of scallops with nearly crispy edges where the heat has caramelised the outside leaving the centre still almost raw. These are good but they are not that. They’re served in a white wine and cream sauce, some needle-thin chives balanced like toothpicks on top and an edible orchid-type thing that looks nice but tastes like a flower rather than food.

The better dish is a plate of luscious tuna, marinated and then seared on the outside so its centre is still vivid, retaining the soft texture and flavour that makes cooking tuna till it turns putty brown all the way through such a food crime. We get a side of nice asparagus and some potatoes that, if they’d had more character, could have completed the holy trinity of the world’s best summer meal, fresh fish, asparagus and spuds with cream.

After someone at the table behind orders strawberries and raspberries we go for the same. It’s the simplest thing, with a dusting of icing sugar and a tiny pot of whipped cream on the side. There are added blueberries and those leathery cultivated blackberries which I would happily go without in a less-is-more version of dessert.

When so many places get fish wrong it’s great to visit somewhere with a long history of getting it right. Those main course prices make for an expensive lunch (with just one glass of wine we come out just shy of €100) There is a €21 two-course deal that would have reduced that significantly.

These days, a younger shoal of chefs is nibbling at Cavistons unique selling point. Does it need a refresh? Yes. Would the crowd who loves Cavistons thank me for sticking my oar in and suggesting one? Probably not.

Lunch for two with a glass of Albarino and dessert came to €94.25.

Facilities: In the words of another customer “a tight fit”

Vegetarian options: Very limited. One goats’ cheese and beet starter. After that you’re on the sides.

Ross O’Carroll-Kelly: We’re not American. This is how people from south Dublin talk?
9