First Look: Inside the Virgin Mary, the Dublin bar with no booze

‘Can you lose the booze and keep the craic?’ The Virgin Mary hopes the answer is yes 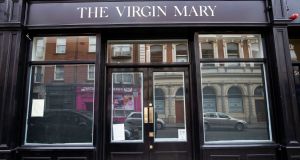 When Vaughan Yates tells drinkers that he is opening a no-alcohol bar, he is typically met with the same response. “Their first reaction is just to burst out laughing,” he says.

This week, Yates and his business partner Oisin Davis are set to open The Virgin Mary, Ireland’s first alcohol-free bar. Located in what was once a furniture shop on Capel Street, the stylish bar seats 30 and offers a selection of non-alcoholic cocktails, beers, and wines.

Yates and Davis are veterans of the drinks industry and previously collaborated on Poachers, a premium Irish tonic water. They were inspired to set up The Virgin Mary after noticing both a growing appetite for non-alcoholic drinks and a gap in the market for an alcohol-free venue.

“When you give yourself boundaries, you’re forced to be more creative,” she says.

Many non-alcoholic cocktails can taste like sugary facsimiles of the real thing. Both Walsh and Yates were keen to avoid clichéd mocktails and create drinks that tasted “grown-up”.

The result is a range of cocktails designed to emulate the taste and mouthfeel of alcoholic drinks. The bar’s Virgin Mary is a hot and spicy non-alcoholic surrogate for the Bloody Mary. Meanwhile, the Cedar’s Spritz is a refreshing alternative to a gin and tonic made with non-alcoholic gin and sparkling wine.

There are also a selection of non-alcoholic beers with Mikkeller’s Drink in the Sun coming highly recommended.

The bar will also serve Raven Nitro Coffee on tap. The coffee is poured from a stout tap and mimics both the texture and appearance of Guinness when served chilled in a glass.

In other words, there are drinks to cater to every palate.

“We did the menu in December and since then quite a few products have come out,” says Yates.

Open from 4pm to 11pm each day, the bar aims to recreate the buzz and atmosphere of any other late-night venue with “lighting, music, and conversation”.

Like a growing number of venues and businesses, it will not accept cash. It will also strive to keep waste to a minimum. One example of this is Walsh taking the pulp from tomatoes used to make Virgin Marys, dehydrating them and making tomato crisps.

As for the target demographic? “People who don’t want to consume alcohol but still want to have a good time,” says Yates. That could be anyone from people who are pregnant to people who abstain from alcohol for religious reasons, he adds.

Likewise, they hope the bar will appeal to drinkers who just want more options when it comes to places to socialise with friends.

The Virgin Mary is in somewhat uncharted territory. There are very few examples of alcohol-free venues even internationally. One early example was Vena’s Fizz House in Portland and even it eventually started serving alcohol.

But with supermarket shelves now carrying drinks with names like “nosecco” and as attitudes towards alcohol change, Yates is convinced that there are great possibilities for an alcohol-free venue.

“There is still a long way to go in this field,” he says. “We’re only really at the beginning of it, both from a cultural point of view and products.”

“Can you lose the booze and keep the craic?” muses Walsh. The Virgin Mary will be hoping the answer to that question is yes.