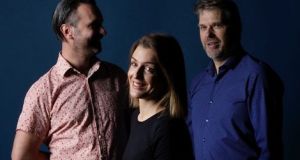 Oisín Davis (left) and Vaughan Yates, who are opening Ireland’s first permanent no-alcohol bar, with Anna Walsh, who will be the bar manager.

Heard the one about the Irish pub with no booze? Yes, really.

The Virgin Mary bar will open its doors on Capel Street in Dublin 1 next month, serving an extensive range of cocktails, wines, beers and mixed drinks, all with one thing in common – zero per cent alcohol.

It is the latest project from drinks industry experts Oisín Davis and Vaughan Yates, who also collaborated on the creation of the Poacher’s range of Irish-made mixers. According to Davis, the idea for the bar came from a trend they identified in the growing popularity of non-alcoholic cocktails and craft beers, and a desire to offer non-drinkers a space in which to socialise without being exposed to alcohol.

“I have friends who don’t drink any more and it dawned on me that there is nowhere that these people can go after four or five o’clock, where they are not confronted with alcohol. I work fulltime in the drinks industry, so I am very much aware that everything has to be in moderation. I go through periods myself when I abstain, not just in January.”

There may be no alcohol in the drinks, but in every other respect, The Virgin Mary will resemble a proper pub. “Not only is it going to have all the trappings of a bar, it’s even going to have a snug,” Davis says. “We want it to have everything you’d expect from a bar – a premises that looks, sounds and tastes like a bar, but without the booze. We want customers to feel that they are not missing out.”

He describes the interior design of the former furniture shop as being a mixture of classic Irish pub and modern cocktail bar. It will accommodate 30 customers. Because it is small, there is no room for a kitchen, so no food will be served. An opening date has not yet been finalised, but they are working towards mid-February.

No licence was required to open The Virgin Mary, “and the insurance bill is a whole lot less because we are not serving alcohol,” Davis notes. Drinks prices will be lower than in normal pubs in Ireland, with cocktails costing between €7 and €8, and wine by the glass, €4.50, and the bottle, €20. It will open seven days a week, from 4-11pm.

Davis expects that the bar’s customers will include foreigners working and studying in Dublin “who don’t drink as much as some of the Irish might do.” In researching the project, he found that it appealed to a younger generation. “The younger they are, the quicker they understand the concept.”

Tourists will also be a target market. “We will be making them aware that in a city which is so well known for its party-style drinking, there is an alternative.”

The concept of the boozer with no booze is not unique to The Virgin Mary. The Clanbrassil Street pub MVP runs regular Sober Sundays, and next week the Bar For When You’re Off The Beers will open as a pop-up on South Anne Street in Dublin 2.

However The Virgin Mary is Ireland’s first permanent alcohol-free bar, according to Davis and Yates, who hope to expand the concept abroad. “Nothing is carved in stone yet, but we’ve been in talks with people who might want to work with us in different countries, so we will be keeping a keen eye on how it works here in Dublin. If you can make it work in Dublin, you can make it work anywhere,” Davis says.

The pub will be managed by Anna Walsh, who was previously at MVP on Clanbrassil Street. For the bar’s signature drink, she has created a non-alcoholic version of the Bloody Mary, made with freshly pressed tomato and lime juices, Scarlet hot sauce, made in Dublin with Irish-grown chillies, a special blend of spices, and served with a pickle. The cocktail list also includes a pomegranate, hibiscus and black cardamom drink called Tiki Street, and a date, oat milk and tahini blend called Dessert Anyone?

It will also serve a selection of alcohol-free beer including Mikkeler from Denmark, which Davis says was “one of the nicest beers I tasted in all of 2018, if you were to blindfold me I don’t think I’d have noticed there was no alcohol in it.” De-alcoholised wines will include Natureo red and white from the Spanish winemaker Torres. The popular Seedlip and Silk Tree spirit-like drinks will also be available.