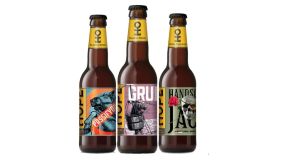 Some of the Hope beer range

Hope Brewery is one of the more quietly successful of the Irish craft breweries, with sales approaching €1 million. The brewery was founded in 2015 by four friends. “It was a third-act business: after a first career and bringing up kids, we needed something to do. I spent a good part of my pension on the brewery, so we have state-of-the-art German equipment,” says Wim de Jongh.

His wife, Jean Mahony, and friend Des McSwiggan are both involved, as well as a Dutch friend, Paul Ritco, who owns a sister brewery (called Hoop) in the Netherlands.

“None of us are brewers, but we hired very good brewers, so we are able to brew consistent, high-quality beer,” de Jongh says. That doesn’t mean everyone likes them, but they are consistent.” They now have a team of seven working in the company.

Hope, one of the few breweries on the northside, is based near Howth Junction Dart station, handy if you want to enjoy a brewery tour. You get to taste five or six beers, so a car is not an option. Hope puts a lot of effort into pairing food and beer, and still offers 33cl bottles – “perfect for restaurants”, says de Jongh.

“We still see plenty of potential for growth in craft beer. Every bar in the country will need to have at least one craft beer, and we want to be part of that. Alongside a core range of five beers, they release seasonal and limited editions.

“We aren’t the cool hipster dudes – although I employ a few of them – and we are not rock stars like some of them,” de Jongh says. “We are more silver start-up. It is great fun, and the craft beer community is a really nice space. Everyone is friendly and open. Here we’re all responsible for everything. I love the direct contact we have with our customers every day. You are always on the spot, talking about your beer.”

Hope beers are widely available, including from SuperValu and some Dunnes Stores. As well as the Hop-On IPA, a session IPA, I enjoyed the warming rich Edition #17 Foreign Export Stout.