A fantastic four Irish whiskeys from among our very finest

Tempted to raise a glass of our national spirt on St Patrick’s Day, then why not try these? 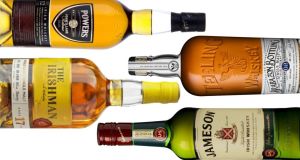 Four of the best from the treasure trove that is our national spirit.

As Irish whiskey came back to life over the last decade, a small group of enthusiasts began meeting in the Celtic Whiskey Shop in Dawson Street, tasting talking and unravelling the secrets of our ancient national spirit.

“It came out of  frustration that we weren’t getting a voice and the true story of Irish whiskey wasn’t being told. We are a  group of grass-roots enthusiasts who have a passion and expert knowledge. We wanted to share both. There is true camaraderie among whiskey-lovers, a real willingness to share information, although there is always a competitive streak too.”

Florides is excited about the rapid changes that have taken place in recent years. “The last decade has been the most exiting and the most significant since the late 1800s. As all the new distilleries come on line we will see the real styles developing; for the moment, the process of finishing allows a distiller to say something different. I do think we have some very innovative distillers, with the potential to do interesting things.”

For the moment, he sees government legislation as the most serious problem facing the nascent business.

“The Alcohol Bill is the single biggest threat. A distiller really needs to be strong in his home market. Other countries don’t have the same limitations as us and I do worry about the effect it will have.”

I asked the team at Irish Whiskey Magazine to choose their four favourite Irish varieties, including one less expensive blended whiskey.

“The Irishman 17-year-old is a limited edition whiskey from Walsh Distillery. Matured in Oloroso sherry hogsheads, we love its rich sherry finish and the quality of the whiskey used. It is smooth enough to be taken neat, although adding a drop of water opens up the fruit notes. Powers Johns Lane 12-year-old is the epitome of a traditional Irish Pot Still whiskey. It has a superb creamy mouthwatering taste and is incredible value for money. Teelings is responsible for some of the most innovative finishes and have been leaders in the new generation of distilleries opening up around the country. We chose the Brabazon 2 for the more unusual port cask maturation. A hefty 49.5 per cent, this really opens up nicely with a drop of water.”

As for the less expensive tipple, Florides had difficulty making a final decision.

“I would probably go for the Jameson Black Barrel or the standard Jameson. I like the sweetness. It is uncompromising, but heart warming. I also like Bushmills White Label and the Black Bush too.”

Plenty of choice if you intend raising a glass on St Patrick’s Day.

The nose has a beautiful balance of cocoa, dried apricots and orange zest with a touch of candyfloss sweetness; at 46% this feels incredibly soft, yet crisp and mouth-watering. The pot still spice notes come through with hints of marmalade, apples and toffee, leading to a soft musky finish with dark chocolate.
Stockists: Widely available from off-licences.