Where avo-toast meets a full fry: a delicious day in Galway

Review: Kai and Tartare are very different but share a dedication to the best ingredients 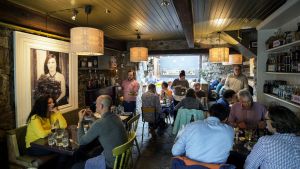 We call him brunch baby. He’s Galway’s most amenable small man, munching on whatever’s to hand, bread or napkin. He’s not fussed, while his parents snatch a few paragraphs of the papers. Brunch baby is one of the great things about this place, the youngest diner in a crowd that has settled on chef Jess Murphy’s tables as suddenly as the flurry of snow outside.

I’m in Kai on the Sea Road in Galway with my chauffeur and my chaperone. We’re on a road trip west. Early migrating birds we’ve bagged a table facing the lit stove from a nook under the stairs. There are candles flickering and a specials board full of things we’d like to spend the day eating. We are in our happy place.

By rights I shouldn’t be in Kai. I know and like chef owner Jess Murphy a lot. She’s the kind of woman who can reminisce about “dry-humping a deer carcass up the stairs” during a book launch speech (in Charlie Byrne’s bookshop holding a copy of Counter Culture, The Sheridans Guide to Cheese). Fawning over friends might be a journalistic privilege but that doesn’t make it a good look. So with those cards on the table we’re here to see why people stand and queue for a Kai brunch.

The chef is not in the building today. She’s been visiting New Zealand Instagramming shaggy highland cattle and washing baskets filled with home-grown avocados on her mum’s farm.

That connection to farms defines Murphy’s food and the reason Kai is an all-ages place is its menu. The specials chalkboard is that rare Venn diagram where avo-toast meets a full fry. The Kai Fry is a plate of crispy bacon, Herterich sausages, a bowl of creamy butter beans in house sauce, “hungry gap kale” and a saucer-sized disk of Kellys black pudding for the last bit of ballast. I have west-coast crab meat, stirred together with house mayo, tiny cubes of crisp green apple, fresh dill fronds and slathered generously on to sourdough toast. That’s topped with a creamy layer of avocado and freshly poached eggs and it’s all finished with “Steve’s leaves” a madly tasty mix of frondy mizunas, chervil, rocket and dandelion. “Love your leaves Steve,” Amy says.

She’s got them on her plate too. It’s a single croquette, no finger sized dainty things here but a gorgeously crisp panko-ed slab of pumpkin mashed and spiced with chilli and bound with the sharpness and umami of melted pecorino. There’s 3FE bacon smoked with chaff (a waste product from coffee roasting), which gives the bacon a nutty coffee finish.

“Are you ready for cake?” the lovely waiter asks. “Always,” it’s part of the reason we’re here. The hunting down of “cake cake” is an activity to which my friend Ashe has dedicated large chunks of her life. Mine is a great slab of baking: almond and pear chocolate tart on great buttery pastry both heart and finesse. There’s a peanutbutter and cream cheese concoction which is eye-closingly good. The only miss is a coffee cake that’s all about the icing and doesn’t taste enough of coffee.

Then we’re gone, past the growing queue of hungry people out into nearly warm sunshine. Galway will throw a lot more weather at us by the time we reach Tartare on Dominick Street where none other than Brunch Baby has beaten us to it. He’s installed at a table with his parents, still happy, still brunching.

We are brunched out and we want to give the small plates a spin in this smart wine bar, the latest in chef JP McMahon’s empire. It’s a nifty fitout. There’s an unplastered wall decorated with a black and white block print of a pig, a wolf and a girl all trying on uncomfortable looking high heels. The floor is new herringbone oak and the tables are a mix of brass-bound circular marble ones and high wooden numbers with stools. They’re nearly finished service so we limbo in under the four o’clock deadline and order from the welcoming waitress.

In a place called Tartare you have to try the tartare and it’s lusciously good. Small chunks of tender beef have been rounded up into a loose patty to one side of a plate with a gorgeous hessian glaze. The meat has been laced with shards of sweetly pickled onion and finished with gluey dots of egg yolk. The Dooncastle oysters (three of them on a tray of rock salt) are white as wave tips and dressed with a sweetly pickled sea lettuce and trout roe. We get a cheese scone (“the smallest scone I’ve ever seen,” says one friend. “It’s called refined,” says the other). No big ignorant lumps of scone here. This is more a scon, small cakey-like brioche with a nutty cheese warmth instead of a sweet edge. The “fermented butter” just tastes like butter, good butter, but nothing extra going on.

Kai and Tartare are very different places but they share a commitment to that beautiful idea of starting with the best ingredients and building everything else from there. Brunch baby’s future is in good hands. Lucky little devil.

Brunch for three with cake and coffees came to €62.60. Small plates in Tartare with apple juice and sparkling water came to €30.60

Verdict: 8.5/10  Kai and Tartare. A Galway two-hander that makes for a delicious day

Facilities: Fine in both

Food provenance: More extensive in Kai. No provenance on menu for that Tartare beef

Vegetarian options: Good in both