Create a pastry for the new Shelbourne afternoon tea menu 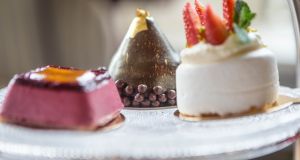 The Lord Mayor’s Lounge at the Shelbourne is getting a revamp and so is its afternoon tea. You could win afternoon tea for six by designing a new pastry or cake for it

The Lord Mayor’s Lounge at Dublin’s Shelbourne hotel is currently being refurbished, with designer Guy Oliver, who has worked on No 10 Downing Street and Claridges Hotel in London, overseeing the project.

As the home of one of the city’s grandest afternoon teas, the menu is also being redesigned, and an Irish Times reader will win an opportunity to have their Shelbourne-inspired pastry recreated in the hotel kitchen and served to them, along with five friends, when the room reopens in mid-April.

To be in with a chance of winning afternoon tea for six, take a photograph of a pastry or mini cake that you have designed and made yourself, and send it, along with the recipe, to shelbournecompetitions@marriott.com, by March 19th.

The winner will be invited to visit the hotel kitchen, where executive chef Garry Hughes will put the finishing touches to the recipe and its presentation. It will also be photographed for reproduction in the Irish Times Magazine. At a later date, the winner will return to the Shelbourne to enjoy the full afternoon tea service, including their personal pastry, in the company of five friends.

The winning design should take inspiration from the hotel, its history or decor, including the buttery yellow, gold and ivory colour scheme for the new lounge. Terms and conditions apply, and for full details see shelbournedining.ie.

Next Saturday, March 17th, the Honest2Goodness market in Glasnevin, Dublin, is going full-on green, with green prosecco cocktails, green soup, green cakes and stallholders encouraging customers to order as Gaeilge. Music will be provided by the local Comhaltas Ceoltóirí branch. Market regular, Dil Wickremasinghe will be recording customers and producers talking about what the market means to them, for her Sparking Change podcast.

Sophie van Dijk spent three years as a fresh food buyer for Tesco, sourcing chilled convenience foods such as ready meals, soups and sandwiches. So when she came up with her own idea for an innovative food product, she knew what would appeal to consumers.

Dollop Ghee is butter – Irish of course – that has been clarified and simmered so that the milk solids acquire a toasty flavour that remains when they are filtered out. It is mostly used in Indian cooking, and according to van Dijk, a “dollop of ghee is also delicious stirred into rice, cooked vegetables or even porridge”. It has a high smoke point, and an intense, more buttery than butter taste.

“When we were small, there was always a jar of ghee in our kitchen press as my sister’s cello teacher, Aisling Drury Byrne, was fanatical about the stuff,” the UCD commerce graduate says.

“Years later, travelling in India with UCD Volunteers Oversees one summer, I rediscovered this fabulous ingredient and began to experiment by making it and cooking with it in non-traditional ways.”

Her lightbulb moment came when she was doing the 12-week course at Ballymaloe Cookery School in 2017, having moved on from the retail sector.

“An Indian lady on the course was raving about ghee made with Irish butter. It was obvious. Irish dairy products are the best in the world: fantastic quality butter makes fantastic ghee.”

She is now manufacturing it with unsalted Irish butter in Dundalk, Co Louth and selling it in 200ml jars (€6). Stockists include independent food stores and delicatessens.

“We launched in January of this year and we are currently in 15 grocers, delis and butchers between Co Louth and Dublin and have recently found a distributor to start supplying more independent retailers around the country, as well as developing a catering-sized offering.” For stockists, see dollop.ie.

Looking for a last minute Mothers’ Day idea? Mums who have lunch or dinner at the Cliff Townhouse tomorrow will be gifted a ticket to the Ireland’s Fashion Radicals exhibition at the nearby Little Museum of Dublin. These have to be pre-booked and used tomorrow, so the hotel will reserve the museum visit for the diner when lunch or dinner is booked, depending on their preferred time and the museum’s availability. Lunch or dinner, with tea of coffee, is €49 per person.