Donal Skehan to present ‘Saturday Kitchen’ on BBC One 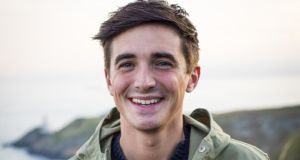 Donal Skehan ... back in Ireland for a few months, but heading to London this weekend to present ‘Saturday Kitchen’ on BBC television

Martin resigned in February, saying he was now “off the leash”, and hinting that his resignation was down to budget cuts at the BBC. He is now cooking at his restaurant James Martin Manchester – tweeting last week that it was “great to be back in the kitchen”. He also has a restaurant at Stansted airport, James Martin Kitchen, and is a guest chef on the P&O cruise ship Britannia.

Skehan will be the third in a series of guest presenters – following on from chef Michel Roux junior and former model, TV presenter and cookbook author Lorraine Pascale – to take the helm of the 90 minute show, which is filmed live. “Saturday Kitchen has become an institution at the BBC and a big part of many people’s weekend routine, so there is huge pressure, but I’m really excited about the challenge of a live show and looking forward to cooking some delicious dishes,” Skehan said.

He will be cooking lamb shanks with a colcannon mash, as well as the celebrity guest Martin Compston’s food heaven or hell dish – based on votes from the public. Compston is the actor who plays Detective Sergeant Steve Arnott in the BBC drama series Line of Duty.

Skehan’s guest chefs will be Theo Randall, who worked at the River Café in London for 17 years before opening Theo Randall at the InterContinental on Park Lane. Randall specialises in high-end rustic Italian food and has written two books Pasta (2006) and Simple Italian (2015).

The second guest chef, Sabrina Gidda, also works with Italian food and is head chef at 120-seat Bernardi’s, which opened  in London’s Marylebone in September.

The show will also feature clips from the BBC archive of Rick Stein, James Martin, the Hairy Bikers and Brian Turner food shows.

Skehan and his wife and collaborator Sofie Skehan Larsson are currently living in Howth, but plan to return to the US, having spent a month in California earlier this year, once their visa application is finalised.