The self-published collection of 1,000 recipes was so elusive that for two decades pdf copies were traded, but now you can buy it online 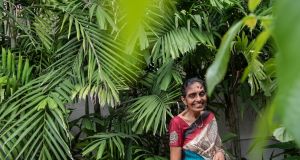 Usha Prabakaran was at home, talking on the phone with a college friend, when she stopped making sense. Her speech scrambled. Her vision blurred. She dropped the receiver and fell to the floor.

It was 1998, and Prabakaran, a former lawyer living in Chennai, a major city on India’s southeastern coast, had just slogged through a decade of research and recipe testing for her comprehensive, single-subject cookbook, Usha’s Pickle Digest. A party was scheduled for the following week.

At the hospital, Prabarakan learned that a rare fungus had lodged itself in the front of her brain. She needed surgery to remove the tumour and long periods of rest to recover. The book, and the party, were quickly forgotten.

But over the next two decades, Usha’s Pickle Digest, self-published by an unknown author, with a first print run of just 1,000, became a cult classic in India and its diaspora – praised for its precision and scope, celebrated on blogs and podcasts and hunted down in shops, where it sold out.

Hard copies were scarce. For years, the only way to get one was to email Prabakaran herself, who might promise to print another run soon, when she was feeling better.

Some cooks couldn’t wait – they photocopied pages and passed them around, which was fine by Prabakaran. She didn’t feel a sense of ownership over her recipes. The author became known for answering friendly inquiries with a free PDF, which is how her pickle book hopped around the world as an email attachment.

Prabakaran, now 64, became known as India’s “pickle queen,” but she wasn’t interested in monetizing that title. “I know nothing about publishing, and I was never interested in selling books,” she said at her home in Chennai. “My job is to keep the past alive.”

India’s pickle culture goes back thousands of years to when cucumbers and other vegetables were simply preserved in salt. Modern Indian pickles are more complex and probably more delicious, too – hot and tangy, deeply perfumed with aromatics and ground spices.

Mango and lime pickles are commonly sold all around the world, but nothing escapes pickling in India: plums and hog plums, cherries and chokecherries, sprouted fenugreek seeds, bamboo shoots, fat gooseberries, hibiscus flowers and green walnuts. Cooks work with all kinds of fruits, vegetables, flowers, roots and seeds, using every edible part of every possible food.

These pickles trot out at breakfast, lunch and dinner, expanding the pleasures of every meal, from a plain bowl of rice and yogurt to a grilled cheese sandwich.

Many foods are preserved through anaerobic fermentation: The fresh food is first sun-dried to get rid of excess moisture, then salted. In the warmth of the sun, bacteria digest the sucrose, producing acids that both preserve the food and prevent the growth of other, less friendly bacteria.

Other pickles are brined in salt water, vinegar, citrus juice, tamarind juice and even yogurt. The only real defining characteristic of India’s pickle culture may be its range. Or, as Prabakaran put it, “an inordinate variety of mind-boggling permutations.”

In her book, Prabakaran limited herself to 1,000 recipes. When I finally got my own print-on-demand copy of Usha’s Pickle Digest, through Amazon, I was dazzled.

The book isn’t pretty. It’s text-heavy and minimally designed, resembling the most utilitarian, guide-like cookbooks of the 1970s. (“My book is meant to be used by people who cook,” Prabakaran said.) It’s also joyous and authoritative, crammed with information.

A chart at the back of the book translates ingredient names into nine languages, including Marathi, Bengali, Telugu and Tamil, which serves as a gentle reminder of the multiplicity of India’s pickle culture.

I tracked Prabakaran down on WhatsApp and asked if I could visit on my way to see relatives in Pune, about 750 miles northwest of Chennai. “I look forward to you picking my brain, or what little of it is left,” she messaged back.

Prabakaran is small-framed, with a wicked sense of humour and a big, throaty laugh. Her forehead is dimpled where the tumour was removed, close to the hairline, and she has no interest in reconstructive surgery.

“People care too much about looks,” she said with a shrug. “If I have any spare time, I want to work on my books.”

Her home is at the end of a cul-de-sac of gated houses with short driveways and lush, overgrown gardens – plumeria, wild lemons, papaya, birds of paradise. The morning I visited, the pavement was splattered with light rain, and a caramel-coloured calf wandered along the wall.

In the open kitchen, a cook boiled tea and steamed idlis for breakfast. “You have to try this with my citron pickle,” Prabakaran said as she spooned the luminous orange sludge onto my steel plate.

The pickle did what all great pickles do: It revived me with a ripple of salt and acidity. The grainy oil tickled with chiles and citrus. It had the effect, with every breath, of filling my lungs with more air so I could breathe more deeply. And it made everything on the plate taste bigger, stronger, hotter, better.

“Isn’t it absolutely dynamite?” she asked. The question was rhetorical. She was grinning.

Prabakaran grew up here in Mylapore, an old neighbourhood in central Chennai. At home, the family spoke Tamil and English, although along with the children of other well-to-do families she also learned Hindi and French, in between karate and Carnatic music classes. In college, where she studied law, she met her husband, S.G. Prabakaran, who was also training to be a lawyer.

Her mother enjoyed reading the newspaper cover to cover, but cooking, not so much. Usha Prabakaran’s mother-in-law, though, scheduled her days around food, preserving new batches of seasonal pickles every week, sending Prabakaran home with jars of gooseberries in yoghurt, sweet-and-sour orange peel and stuffed Bengal plums.

Prabakaran was hooked. She apprenticed herself, learning to turn jars in the sun so the fruit dried evenly and to combine new and old tamarinds to balance out their acidity levels. She made so many pickles that she often gave jars away to friends and family, who begged her to write down a few recipes and share them. As she tried to standardize the recipes, her project became increasingly more ambitious.

She wanted to document heirloom pickle varieties and to share every single tip she had learned along the way. What would be the point of sharing recipes if she didn’t explain how to sterilize glass jars and grind masalas at home?

She spoke with publishers, and when none were interested in her idea, Prabakaran decided to do it herself. To broaden her sweep as she researched, she turned everyone she met into a source: friends, family, their colleagues, cooks working in middle-class home kitchens and banquet chefs catering weddings.

“My friends called me a crafty devil, because I could wriggle a pickle recipe out of anyone,” Prabakaran said. After she narrowed the recipes down from a catalog of 5,000, she tested each one in her home kitchen three times – a more thorough process than is used for many glossy cookbooks from big publishers.

After her husband died in November, she turned her focus to finishing her second book. Usha’s Rasam Digest, in the works for a decade, collects 1,000 recipes for rasam, an everyday soup also called saaru.

Rasam, which is vegetarian and generally quick and inexpensive to make, is deeply familiar to Indians, particularly South Indians, but different regions and families have their own methods.

Prabakaran plans to self-publish the book in March. She wants to make it easy for cooks to find, right from the start, even if that means giving it away for free.

“I just want everyone to understand the depths of Indian cookery,” she said, opening another jar of pickle, reaching for a spoon. – New York Times.

1. In a medium bowl, combine all ingredients; toss thoroughly.

2. Transfer mixture to a clean jar; it is ready to eat right away. Pickles keep at room temperature for one week or refrigerated for two weeks.