Mini festivals, the hunt for a bigger city centre location plus expansion beyond Dublin on the cards for street food market 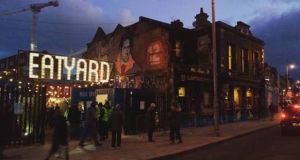 Eatyard, the outdoor street food market and performance space beside The Bernard Shaw pub, reopens for the 2018 season on March 1st, and may be joined by another similar venture in Dublin, as well as one in Co Clare, according to Trev O’Shea of Bodytonic, the pub, festival and events company which runs it.

“We plan to open two more variations of the outdoor/indoor/street food experience, each with a different vibe, look and feel,” O’Shea says.

One of these is planned for Dublin, and there is a likelihood that the concept will also be rolled out at Pot Duggan’s, the pub in Ennistymon, Co Clare which became part of the Bodytonic group last year and which reopens next month after extensive refurbishment.

O’Shea is also looking for a bigger home for Eatyard. “It’s time to kick it on again now and add more layers and ideas to it, and open a bigger space. We are looking for somewhere between 1,000 and 3,000 sq m, but it’s proving hard to find.”

Eatyard brings together a revolving selection of street food vendors and opens from Thursday to Sunday each week, from noon to late. It became a permanent fixture in South Richmond Street in 2016.

“But the concept started in 2015 at our Beatyard festival. It grew from that, and also our experience of running Big Grill festival and working with various vendors and pop-ups in our bars over the years,” O’Shea says.

Mini festivals and themed events are part of the Eatyard concept. This year’s events include a Cheese and Wine Festival (March 23rd and 24th), and one devoted to the humble crisp (June 16th and 17th).

“It will be a festival for wine and cheese fans – all the fun without the intimidation. We’ll have a brilliant selection of boutique wine vendors selling stuff you’ll want to drink and buy. We’ll have as much cheese as we can fit in, with cheese boards, raclette and gourmet toasties, and there will be plenty of tastings and great talks and demos on The Stage,” says food consultant Ali Dunworth.

The crisp festival will be about “celebrating all that is great about crisps, with plans for a bottomless crisp brunch, mix and match DIY crisp sandwiches, a Tayto versus King debate, and a crisp tasting menu”, she says.

At any one time there are between 10 and 12 vendors on site at Eatyard, selling a wide range of street food, from burgers to vegan ‘fish’ and chips. The selection is down to O’Shea and his team.

“Sometimes we argue, sometimes we are all in sync. The fact that we can argue over who to put in there says a lot about the great quality of vendors we have to work with.”

The line-up of food on offer constantly changes. “Eatyard only survives, in my opinion, by constantly changing. It is absolutely essential that it keeps changing and evolving. No-one is permanent, we are pretty clear on that, and that is from our side as much as the vendors. Veginity and Boxburger have been there since day one, but they might not be there forever. Some vendors we give one month, or one week, others longer.”

Vegan food truck Veginity has become one of the most popular choices at Eatyard. “It is pretty ironic that Mark [Senn] has come in and done a really good vegan truck, when this whole idea really grew in my head from visiting a vegan trailer in Austin for SXSW many years ago, called Conscious Cravings. That was the first time I had street food that wasn’t a classic burger, bbq, or sandwich joint. And it was great. So my initial idea for the Eatyard space was purely to stick a veggie/vegan food trailer in the space. But traders like Bubble Waffle, Boxburger and Just Wing It have come in and done an amazing job.”

In addition to street food sales, Eatyard’s performance space, The Stage, is where talks, demos and discussions are hosted. “The idea is always to bring the content back to celebrating all that is great about when music and food come together, a bit like the reasons we always seem to hang out in the kitchen at parties – lots of food, chats, cooking and craic,” Dunworth says.

O’Shea intends to expand this strand of the venture. “We’ve had some great talks, demos and events, and I think that element will play a much bigger role this year.”

And back on the calendar for 2018 after its inception last year is the Irish Street Food Awards. “We’re on the hunt for kick ass street food vendors from all around the country to take part,” Dunworth says.