Whatever happened to the humble gin and tonic?

G&Ts have had a ‘experiential’ makeover, which comes at a price. Is it worth it? 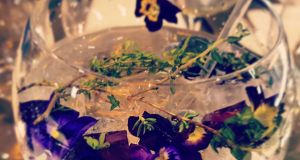 Half the garden can end up in your G&T 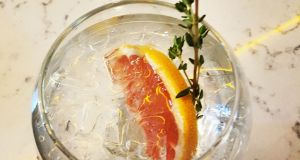 A G&T to put a sprig in your step

A few weeks ago, I was standing at a bar counter, running my eyes across the bar taps and deciding what to order. It was what I would term a slightly yuppy establishment and I decided to forgo my usual pint in favour of a gin and tonic. “What gin would you like?” asked the woman behind the bar. “Eh, Hendrick’s,” I replied, not because I have a special preference for Hendrick’s but because I was flustered and the bottle was in my eyeline.

An extravagant choice in hindsight, but sure look. She quickly set about shovelling ice into what can only be described as a goblet nearly the size of my head and tossing slices of cucumber in with wild abandon. She plonked it and a bottle of tonic in front of me, and demanded €10.50. €10.50!

What ensued can only be described as an out-of-body experience. “Can I tap?” she asked as I handed her my debit card, but I could not answer, for my soul had exited my body. The cause? Paying more than a tenner for a run-of-the-mill gin and tonic.

Over the past few years, the gin and tonic has undergone a substantial makeover. Gone are the days of a Cork Dry Gin and Schweppes served in a tall glass. Nowadays you can expect your G&T to be presented in an ornate fish bowl, adorned with all sorts of garnishes. Sprigs of mint. Grapefruit. Thyme Pink peppercorns. That thing called “star anise” that I always see written on menus but couldn’t identify for €1 million.

They’re more aesthetically pleasing than before and infinitely more Instagrammable. Come this evening, your social media timeline will probably be littered with more “Gin o’clock?” posts than you care to count.

Moreover, tonic water isn’t just tonic water any more. It’s elderflower-infused tonic water. The price has changed, too. You can now expect to pay a minimum of €8.50 or €9 for a premium gin and tonic with garnish. Indeed, The Marker Hotel has a bespoke gin and tonic menu where it has €17 G&Ts available for your delectation. (Made with gastronomic gin, naturally.)

So what’s behind this gin resurgence? Eamonn Casey, manager of The Westin, says the reasons are manifold. It’s less calorific than beer, it’s easier to drink and it’s more of an “experiential purchase”. More than anything, though, it’s versatile. “I would say people drink water when they’re thirsty,” says Casey. “If they’re drinking a gin and tonic, it’s an experience. If you’re going out and having pints of Guinness all night, they all taste the same. A vodka and coke doesn’t taste very different if you put a slice of cucumber in it, for example, but you can have a lot of fun with gin and tonic.”

Both Geoff Carty of 57 The Headline and Patrick Cannon of Ruin Bar point to the uptick in domestic gin production in Ireland as a major contributing factor.

“The main reason for the popularity is the rise in Irish whiskey distilleries. Whiskey takes years to produce, whereas gin can be produced in as little as four to six weeks,” says Carty.

“The fact that gin can be produced in large quantities in such a short space of time means it’s very easy for new gins to come on the market to keep people interested,” says Cannon.

Over the past few years indigenous gin brands have sprung up left, right and centre: Drumshanbo Gunpowder Irish Gin, Mór, Thin Gin, Shortcross Gin and Glendalough, to name but a few.

PJ Rigney, founder of The Shed Distillery, says it’s a “really exciting time” for gin production and credits younger drinkers with helping to fuel the drink’s surge in popularity. “Previously gin was seen as something your granny would drink, but now, with the arrival of super-premium gin, the millennials are leading the charge.”

Are we losing the run of ourselves with garnishes and pricing. “I suppose bars are trying to give as good an experience as possible,” says Kevin Keenan of Glendalough Distillery. “How they price that is up to them. I will say this, though: given the man hours and fresh wild ingredients that go into our gin, it is priced pretty keenly.”

Nichola Beresford of Thin Gin has more of a “live and let live” approach.

“Who am I to tell anyone how they should enjoy their gin?” she says. “If you like watching the theatre of a bartender whipping up a salad in a stemmed fishbowl garnished with exotic, unpronounceable dried berries from the other side of the Sahara, go right ahead.”

On the subject of whether the days of a Gordon’s and Schweppes are behind us, bar owners are divided. Carty says it’s rarely ordered in 57 The Headline. “The call for a Gordon’s and tonic is so infrequent due to our large selection that I don’t think we even have a bottle in stock.” Additionally, Eamonn Casey says the days of Schweppes’ domination are over with the arrival of premium tonics such as Fevertree, Thomas Henry and Poachers.

On the flip side, Derek Garry of The Gin Palace maintains that you “you can’t beat a good aul’ Gordon’s and Schweppes and a nice wedge of lime”, while Patrick Cannon of Ruin Bar says the old stalwart can be “just as nice” as premium gins.

Something for everyone, then. Now if you excuse me, I’ll just be figuring out what I’m supposed to do with this handful of basil in my drink.

The Gin Palace, Middle Abbey Street, Dublin 1
The Gin Palace knows a thing or two about gin. Its current recommendation? “A glass of Mór gin topped with Fevertree tonic and garnished with some raspberries and mint.” That concoction will set you back €10.80.

Mint Bar at The Westin Hotel, College Green, Dublin 2
The basement bar has a thing about gin and even hosts a gin-themed evening every Friday called Cool as a Cucumber. Try its Rose & Mary, a distinctly floral G&T made with Beefeater, Rose Liqueur, Aperol, flowers, rosemary, rhubarb and tonic. It’ll cost you €12.

The Marker Hotel, Grand Canal Square, Dublin 2
The Marker Hotel’s rooftop bar has a menu dedicated to bespoke gin and tonics. For a wholly Irish G&T experience, try Co Down’s Shortcross Gin paired with Poacher’s Tonic, the first Irish premium tonic, and garnished with orange zest and rosemary. At €14.50, it’s likely to be a once-off treat.