Once you have the knack of this recipe, you will find excuses to bake it 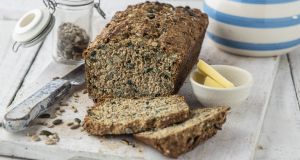 I absolutely adore a good soda bread, and when I’m at home, I’m partial to baking a wholemeal soda, as it feels more wholesome and filling than its white counterpart. Soda bread is a wonderfully adaptable bread, superbly versatile, and so quick to throw together that I make it twice a week. As I make it so often, I now know it by heart. It is a basic recipe, with endless possibilities for adding different flavours and textures.

It is a hearty wholemeal loaf, and the perfect accompaniment to those warming stews and soups we crave in winter. It’s great as a base for your eggs in the morning, as a side for smoked salmon, for open sandwiches at lunch, or to serve on the table at dinner time to mop up those juices left on your plate. Once you have the knack of this recipe, it will stick with you and you’ll find excuses to bake it.

I have added a mix of seeds to add crunch and texture and keep you fuller for longer. I use whatever I have on hand in the cupboard to make up 100g. Pumpkin and sunflower are what I usually use, but feel free to vary your combinations by using chia, sesame, hemp or linseeds. I have also added rosemary, which gives a beautiful savoury note. Blends of herbs also work well – try it with thyme, sage or chive to vary your flavours.

Soda bread relies on an alternative to yeast as its raising agent. Bicarbonate of soda or baking soda is what makes it rise. It doesn’t need time to prove, as yeasted bread does, and so it can be thrown together in a mixing bowl, in the oven in five minutes, ready in half an hour, and sliced and served in a flash.

I use a blend of wholemeal and plain flour, as the bread would be too dense if 100 per cent wholemeal was used. Some recipes add oats, bran or treacle, but I keep it simple here.

Buttermilk is a classic in soda bread and it gives the bread its characteristic flavour. If you don’t have buttermilk, you can make your own by adding the juice of half a lemon to full fat milk to “sour” it. When the buttermilk is added to the dry ingredients, it reacts with the bicarbonate of soda to make the bread rise, so it’s important to get it into the tin and into the oven as soon as it’s mixed.

Classic soda bread is baked in freeform in a slab, but I’m using my loaf tin here for a smaller loaf. The loaf can be frozen whole, or in slices, and it will keep for up to four days well covered.