Pistachios and almonds give the traditional pie some extra festive cheer 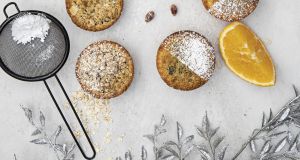 Mince pies are a given at Christmas, and love them or loathe them, they usually make an appearance in some form or another. While there are countless variations, from different types of pastry, be it shortcrust, puff or filo, to the filling – mincemeat with different fruits, various blends of spices, the addition of nuts or alcohol – everyone has their favourite.

I have been making the same pastry base and mincemeat filling for years, tweaking the recipe to my personal taste. The pastry is a quick classic shortcrust, and the mincemeat is as straightforward as they come. Everything is thrown together in a saucepan and left to bubble for the flavours to meld together. It is studded with a blend of fruit, I use the traditional currants, raisins and sultanas, with mixed peel and dried cranberries. The juice of an orange and a splash of brandy helps to plump up the fruit and gives a lovely glaze and glossy finish. I also add brown sugar to give a gorgeous caramel note.

I love using different types of nuts in my Christmas desserts, they add such a beautiful texture. This year, I have created two alternative toppings for my mince pies. They are packed with texture and beautiful festive flavours. One uses pistachios to make a frangipane spiked with orange liqueur, and the other uses almonds, flaked and added to an oaty crumble with an extra hit of almond extract to give that lovely fragrant marzipan note.

Here I have given the recipe to make enough pastry and mincemeat for 12 mince pies, and each of the topping recipes will make enough for six, so double it if you’d like to make 12 pies with the same topping.

Method
1 Put all of the ingredients except the brandy into a medium saucepan and stir well to combine. Bring to the boil. Reduce the heat to a simmer and cook for a further five minutes to ensure the sugar has dissolved.

2 Remove from the heat and add the brandy. Leave to cool completely. Chill in the fridge until ready to make the mince pies.

Method
1 Rub the flour, butter and salt together until it resembles fine breadcrumbs. Add the sugar and mix well to combine. Add the egg and bring the dough together into a ball. Wrap the dough in clingfilm and chill for at least 30 minutes.

2 Roll the dough between two pieces of parchment paper, and using a 10cm fluted round cutter, cut out 12 circles. You will have to re-roll the scraps to make 12.

3 Put the pastry discs into a lightly greased muffin tray and chill the tray in the fridge while making the remaining elements of the mince pies.

Method
1 Chop the pistachios finely. Cream the butter and sugar together until soft. Add the egg, beat well, followed by the finely chopped pistachios, ground almonds, flour, orange zest and Cointreau. Mix well, and chill in the fridge until ready to assemble.

Method
1 Rub the butter and flour together with the sugar and oats. Add the flaked almonds and almond extract. Chill until ready to assemble.

TO ASSEMBLE THE PIES

1 Preheat the oven to 175 degrees Celsius. Put a teaspoon and a half of the cooled mincemeat into each of the chilled pastry cases.

2 Sprinkle six of the mince pies with the almond crumble.

3 Spoon a teaspoon or so of the pistachio frangipane into the remaining mince pies and spread out to the edges using the back of a spoon.

4 Bake the pies for 15-20 minutes until golden. Remove from the oven and leave to cool for 10 minutes before turning out onto a wire rack to cool completely.