Taste of Dublin: The best things to eat and drink at the festival 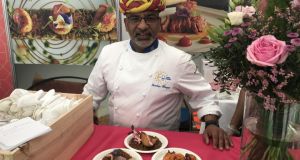 Sundeep Bhagat from Jaipur restaurants, which won the Best in Taste award for their rhubarb prawn curry at Taste of Dublin, which runs until Sunday.

Rhubarb prawn curry from the Jaipur stable of Indian restaurants won best dish at Taste of Dublin 2018, which opened at the Iveagh Gardens on Thursday and continues until Sunday, with up to 35,000 visitors expected to attend.

In the winning dish two Indian ingredients have been replaced with Irish ones, according to Sundeep Bhagat, Jaipur group executive chef. Fermented rhubarb replaces sour tamarind and lemon verbena oil stands in for curry leaves.

All of the Japiur dishes at Taste have a pink ingredient or garnish in keeping with the company’s interpretation of the festival’s theme this year, Food Lover’s Playground, and they have installed a Taj Mahal photo area where you can dress up in Indian garb and have your photograph taken against a backdrop of the monument.

The Dublin 2 venue has taken on the sights, sounds and smells of Asia as restaurants and marketing display stands from the continent dominate the festival, with Taste of Thailand and Taste of Korea mounting impressive displays.

A Thai dish of marinated pork skewers with jaew sauce and sticky rice, from Saba, was second in the Best in Taste awards, and third place went to China Sichuan for its Chinese bao with roasted char sui pork and pickles.

The three Best in Taste winning dishes are worth trying, and they each cost 7 florins, or the equivalent of €7.

At the Pickle Indian restaurant stand the paratha bread to accompany the goat curry is being fried to order and that too is worth splurging a few florins on.

Queues were forming quickly for the potsticker dumplings at the Asia Market stand (8 florins including a beer), and nearby, at the Cathay Pacific pavilion you can pick up a multi-national bento box packed with dan dan noodles, char sui bun, wonton and gyoza (7 florins).

On the non-Asian menu, Suesey Street’s smoked salmon cornettos and sticky braised rib of beef were drawing the crowds.

Next door chef Eddie Attwell was going to great lengths to explain the ingredients in his three daily specials for the Eccles Hotel. His Douglas fir and apple mousse with caramel oats, cucumber and Velvet Cloud yoghurt might just be the prettiest dish of the show.

But the biggest queues of the opening session were for Adrian’s Manor, a collaboration between chef Adrian Martin and Manor Farm, with the buttermilk chicken fillet in a brioche bun the big draw.

Places in the drinks masterclasses will fill up fast, so sign up for those on arrival so as not to be disappointed. Dave Dove – yes, that is his real name – will be demonstrating how to make award winning cocktails at the World Class Bar, before letting participants loose with the booze.

The Roe & Co Tram is the location for contemporary Irish whiskey making cocktails, and at O’Brien’s Wines there is a French theme to the tutored wine tasting sessions.

The Neff Taste Kitchen is a good place to take a breather and watch the pros in action as a roll call of celebrity chefs do cookery demonstrations, interspersed with Dee Laffan’s Producers’ Table talks. This is the biggest cookery stage ever mounted at Taste of Dublin, with seating for up to 100.

A more intimate chef demo area is at the heart of the Taste of Korea stand, where a team of three chefs will be cooking national favourites including bibimbap. Yes, there will be Korean fried chicken, too.

Taste of Dublin continues until Sunday evening, with two sessions each day. Tickets can be booked here, or at the door.