Capel Street food and gift store to open this week, with on-site coffee roastery going into production next month 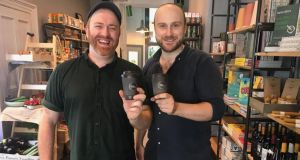 Garrett Fitzgerald and James Boland in their new Brother Hubbard shop, which will sell reusable coffee cups made from coffee grinds

Garrett Fitzgerald and James Boland are opening a food and gift shop in the former Brother Hubbard premises on Capel Street in Dublin 1, and turning what was the original kitchen there into a coffee roastery.

The shop is due to open at the end of this week, with the coffee roastery, which is a collaboration with their head barrista Peter Szaloki and will be called Farmhand Coffee, expected to go into production next month.

In the autumn of last year, the pair took over the former Gary Rhodes restaurant on the corner of Mary’s Abbey and Capel Street, renaming it Brother Hubbard North (their Harrington Street cafe in Dublin 8 is Brother Hubbard South).

With a large dining terrace facing the Luas line, this substantial building now has a capacity for more than 250 diners and is open for breakfast, brunch and lunch all week, and dinner Tuesday to Saturday.

It connects with the original Brother Hubbard, which the pair opened in 2016, initially serving only drinks and cakes, and seating just 15. The menu has now expanded substantially, and the Middle Eastern influenced food is becoming increasingly vegetarian and vegan, although meat is still served.

“We are delighted to be using the space again and doing something new and exciting there,” Fitzgerald says.

A further development is the transformation of the former courtyard dining space at Brother Hubbard into a pop-up plant store, in conjunction with plantstore.ie. Here, and on the roof garden, Fitzgerald and Boland are growing a variety of herbs, tomatoes and edible flowers to supply the cafes.

The new shop, which is being overseen by Boland, will sell the cafe’s breads and cakes, made on the premises, as well as fresh fruit and veg, larder supplies, cookery books, pottery and culinary gifts.

On one side, the well stocked shelves display what they describe as “world foods”, while on the other there is a selection of their house-made spice mixes, jams and granola, along with Irish made larder supplies such as flour, sea salt, seaweeds, biscuits, vinegars and condiments. Their hummus and pestos, along with Fingal Ferguson cured meats and McCarthy’s of Kanturk black pudding, will be found in a refrigerated unit.

“We’ll also have a lot of ingredients that we use so often, such as sumac, chickpeas, freekeh, orange blossom water, as well of lots of fresh herbs, “ Fitzgerald says.

There is a corner devoted to coffee home brewing, and another with a selection of re-usable coffee cups. They have sourced cups from Kaffee Form, a Berlin company that makes them using waste coffee grinds. Yet more shelves are packed with pottery from Arran Street East, and they are continuing to source Irish-made crafts.

Sustainability continues to be at the core of the Brother Hubbard ethos. They have offered a 20 cent discount to customers using KeepCups for the past five years, and this week they introduced a 15 cent discount for customers who return their compostable cartons when ordering takeaway. The move is to ensure that they are disposed of correctly.

“It seems to be a very common misconception that they can simply be put ‘in the recycling’,” Fitzgerald says.