Bringing pop-up dining to the next level

Glut, by Ciarán Meade and Wayne Dunlea, is a Cork-based food project aimed at bringing people together over exceptional local produce 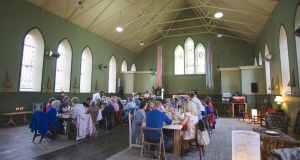 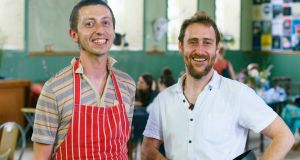 In the first week of July, the Garrison Church at the former Kickham Barracks in Clonmel was taken over by two cooks and their extended team. They were here to feed the audience and the artists of the Clonmel Junction Festival, and the wider community of Clonmel, in The Black Sheep Café. It was a meeting-place hub for the festival, and home to art and food workshops during the day and music at night.

The two cooks were Ciarán Meade and Wayne Dunlea, the founders of Glut, a Cork-based food project that have been popping up since 2015 with an intent to bringing people together over exceptional local produce. Previous pop-ups have included a temporary restaurant in The Cork Cricket Club, a long-table supper in Shandon Guesthouse, and a dinner in Levi’s Corner House (“the best pub in the world” according to Meade) in Ballydehob, west Cork. “Driving around the country meeting producers and learning about their processes is probably my favourite part of the whole job,” says Meade.

In Clonmel, that means hooking up with local producers, of which there are plenty of exceptional ones to choose from within the Tipperary borders, or just over the border in Cork. This summer was Meade and Dunlea’s second year as the hosts of Clonmel Junction Festival’s pop-up café.

This year, there was Tipperary Soup made from Cornelius Traas’ Apple Farm apples and local celery. A Clonmel Mess also featured The Apple Farm’s raspberry paired with local cream. There was lamb, marinated in yogurt and cooked over a barbecue, sourced from James Whelan Butchers in Clonmel.

PJ Ryan from Cashel Blue and the award-winning Crozier Blue delivered a talk at The Black Sheep about a new cheese they’re developing called Shepherd’s Store. “Having PJ break open an 18-month old wheel of this new cheese was probably one of the highlights of the week,” says Meade.

Other local cheeses, such as Cooleney’s creamy brie, made an appearance in The Black Sheep’s sandwich through the week. The coffee was supplied by Golden Bean, whose roastery is based in Ballymaloe House, but their founder Mark Kingston is originally from Clonmel. He roasted a few special bags of Nicarguaran and Kenyan Black bird coffee for The Black Sheep Café.

“Across the board, the feedback was great,” says Meade. “The locals were very appreciative of what we were doing. We were taken aback by the response to our dinner sittings. We were doing busy dinner sittings, everyone was wising us well and asking us to stay all year around. When you hear great feedback like that, you remember that’s why you do it.”

Their other projects include COMIDA, a pop-up tapas night that they have held previously in Gulped Cafe in Cork City. The idea is late-night casual dining with visuals and music with a mix of classic tapas and Irish tapas, such as Ballyhoura mushrooms with cauliflower purée, cripsy onions and kale.

Meade was the host of Blind Dates at Body & Soul, where people were paired up for blind dates, introduced by Meade and then sent out on a raft packed with a Glut picnic on the lake at Body & Soul. They are also behind Eggs on Tour, a Sunday day-trip that involves brunch. They’ll be doing an Eggs on Tour event in September for Taste of West Cork.

Their next event pop-up supper of four or five courses for around 40 people will be hosted in Meade’s home, where they ran a pop-up Good Friday supper earlier this year. The best way to keep in touch with these preserving, foraging and fermenting cooks is through their Twitter feed (@glut_cork) or word of mouth.

Crack on: Where to order an Irish artisanal Easter egg in time for Sunday
7