Communion host must contain some gluten, even if only a trace amount 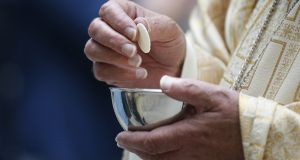 A Vatican directive states: ‘Low-gluten hosts (partially gluten-free) are valid matter, provided they contain a sufficient amount of gluten to obtain the confection of bread without the addition of foreign materials and without the use of procedures that would alter the nature of bread.’ Photograph: Getty Images

The unleavened bread that Catholics use in the celebration of communion must contain some gluten, even if only a trace amount, according to a new Vatican directive.

The directive, which was dated June 15th but received significant attention only after it was reported by Vatican Radio on Saturday, affirms an existing policy. But it may help to relieve some of the confusion surrounding church doctrine on gluten, a protein that occurs naturally in wheat and has become the subject of debates over nutrition and regulation.

The issue is especially urgent for people with coeliac disease, a gastrointestinal immune disorder that causes stomach pain, diarrhoea and weight loss and that can lead to serious complications, or for those with other digestive conditions that make them vulnerable even to small amounts of gluten.

Many other people who do not have coeliac disease may nonetheless have a sensitivity or allergy to gluten, and yet others have adopted a gluten-free diet in the belief that it is healthier — although science is far from clear on this point.

In both the EU and US the description “gluten-free” can be legally applied to foods made with wheat starch from which almost, but not absolutely, all gluten has been removed — the upper limit is 20 parts per million. The Catholic Church will allow bread of this kind to be used for communion.

But it will not allow truly gluten-free altar breads made with rice, potato, tapioca or other flours in place of wheat. (The Anglican Communion has taken a similar position, while some other Christian denominations consider such breads acceptable.)

The new instructions — given in a letter to bishops from the Vatican’s Congregation for Divine Worship and the Discipline of the Sacraments — said that the confusion had worsened because communion breads had become widely available, with varying standards of marketing and labeling.

“Until recently, it was certain religious communities who took care of baking the bread and making the wine for the celebration of the Eucharist,” the congregation said. “Today, however, these materials are also sold in supermarkets and other stores, and even over the internet.”

The new Vatican directive affirms a policy first set out in 2003 by the Congregation for the Doctrine of the Faith, a body led at the time by Cardinal Joseph Ratzinger, who later became Pope Benedict XVI. That policy said that “low-gluten hosts (partially gluten-free) are valid matter, provided they contain a sufficient amount of gluten to obtain the confection of bread without the addition of foreign materials and without the use of procedures that would alter the nature of bread.”

It also approved the use of mustum — a grape juice in which fermentation has begun but has been suspended before the alcohol content (typically less than 1 per cent) reaches the levels found in most table wines — as a substitute for communion wine for worshippers who could not tolerate alcohol.

Parishioners who cannot tolerate even a trace amount of gluten should receive “wine only,” the bishops’ conference says, even if they would normally receive bread but not wine.