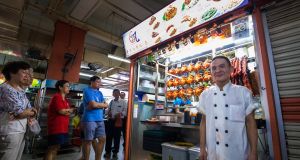 The chef has been hired by a beer company to collaborate on Tiger Street Eats, an outdoor dining event that has been staged in Auckland, New York and Kuala Lumpur, and makes its European debut in Dublin on July 20th to 22nd.

Tiger Street Eats will be located at Portobello Harbour and the Singaporean chef will cook for diners at the event. Tickets cost €10 per person for a three-course street-food-style meal, served at picnic tables, with complimentary beer. They are on sale at eventbrite.ie.

Lemons are the flavour of the summer at M&S, where the citrus fruit is cropping up right across the foodhall offering, in everything from wine to cookies. The sparkling wine with Mucia lemons makes a lovely alternative to a Buck’s Fizz, and with an alcohol level of only 4 per cent, it’s a light, seasonal, party pleaser.

The M&S product research team went to Sicily for the lemons used in the feta cheese with oregano and lemons, which you’ll find in the deli area. This is a really useful product, with cubes of feta marinating in a bath of lemony oil alongside lemon zest and oregano. Perfect for stirring into a bowl of hot or cold pasta, or serving as part of a mezze selection.

Product developer Madeleine Lovett explains the company’s regional focus: “Fresh and fruity flavours are abundant across the Spirit of Summer range. We selected the Murcia and Sicilian lemons because they have the best flavour.” Lemons from the Italian island are also used in a versatile summery mayonnaise that is part of the rage. And it crops up in all-butter cookies too, teamed with white chocolate.

Anyone for a croffle?

Dublin’s Bastille Day events celebrating all things Gallic will include the opening of a Cuisine de France pop-up cafe at 9 Camden Street, Dublin. The cafe will be open 8am to 4pm from July 10th, for two weeks. The menu will include chef and baker Louise Lennox’s take on the crossant/waffle hybrid called the Croffle. Her version will be stuffed with avocado and sun-blushed tomatoes ,with a feta drizzle, gremolata crumb and chopped toasted hazelnuts.

Fintan and Jennifer Larkin and their three sons Ronan, Darragh and Enda have been making and bottling extra virgin rapeseed oil at their farm near Birr, Co Offaly since 2013. They named it Glen Field, after the field they grew their first crop in, and now produce between 40,000 and 50,000 half-litre bottles annually. They have accessed the SuperValu Food Academy, and it is now on sale in 90 branches of the supermarket chain, with a rrp of €3.99.

Monica Lewinsky: ‘I’m not alone any more. For that I am grateful’
10