Chef panned online after including chorizo in classic rice dish 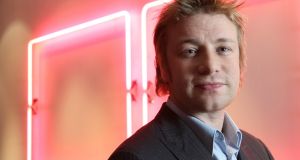 Jamie Oliver: his twist on paella failed to go down a treat. Photographer: Frantzesco Kangaris/Bloomberg News

While Spain seems a country far from harmonious following two inconclusive general elections and almost 10 months of ceaseless political bickering, one cause drove people to unite: a paella recipe by chef Jamie Oliver has caused outrage .

Barely had he posted “Good Spanish food doesn’t get much better than paella. My version combines chicken thighs & chorizo” before the backlash began.

Some were perplexed (“WTF, Jamie Oliver?”); some satirically offered their own interpretations of fish and chips using aubergines, duck, beef and ravioli, and some were sinister: “Remove the chorizo. We don’t negotiate with terrorists. First warning”; “Let’s hope the knife slips when he’s chopping coriander”, and “why don’t you make some chicken nuggets out of your own fingers?”

Hi @jamieoliver, big fan of yours. I guess you know that Valencians call that "Rice with Stuff" (TM). Now THIS ⬇... this is a real paella. pic.twitter.com/s0rxFdSkVC

With a certain inevitability, Oliver’s stab at paella was also juxtaposed with a traditional one and then set next to before-and-after snaps of the hideously botched restoration of a fresco of Christ carried out four years ago.

Kinder commenters pointed out that while the inclusion of chorizo meant the recipe absolutely could not be described as a paella in keeping with the dish’s true, Valencian origins, it might just sneak into the distinct category of “rice and stuff”.

Paella, which spread around Spain from the eastern region, is a seasonal, local dish whose ingredients can include meat, fish, shellfish, vegetables and beans.

Oliver is not the first UK-based chef to visit questionable variations on Spanish classics. Earlier this year, an article in El País criticised Gordon Ramsay for a sloppy paella spiked with chilli – “because it’s never too late to confuse Spain with Mexico” – and lamented Marco Pierre White’s tendency to add too much wine to the rice as well as “enough paprika to stop a moving train”.

Nor is it the first time that Oliver has stirred up international tensions with a rice dish. Two years ago, he decided to improvise on jollof rice , a dish beloved of many west African countries. Once again, he was careful to describe it as his “twist”, but innovations such as vine-ripened tomatoes, parsley and a lemon wedge were a step too far. One woman said the dish “hurts my soul” while another tweeted: “Our plates will not be colonised!”

Oliver’s representatives have been contacted for comment. – (Guardian Service)

Supersized Sutton cottage on a seaside cycle circuit for €750,000
10