The Belmond Grand Hibernian is Ireland’s answer to the Venice Simplon-Orient-Express, with a price tag to match 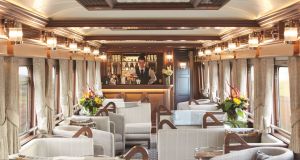 The observation car and bar on the Belmond Grand Hibernian.

The reaction from people who hear about my trip on the Belmond Grand Hibernian train, Ireland’s answer to the glamorous Venice Simplon-Orient-Express, is amazingly consistent. “What’s it like?”, “Is it worth the money?”, and “Are the passengers all Americans?”

Having spent two nights as a guest aboard Ireland’s only luxury sleeper train, with its 20 en-suite cabins, I can say that it is an amazing, perhaps once-in-a-lifetime trip, that should be judged on the quality and uniqueness of the experience rather than the price tag, which nudges north of €3,000 per person, depending on the date of travel.

Yes, that is a great deal of money to spend on a short break, especially one visiting Belfast and Waterford from Dublin. However, from the moment your ticket to travel arrives – in a smart white embossed box no less – until it’s time to say a reluctant goodbye to the staff who form a guard of honour when the shiny blue train rumbles into Heuston on a Monday morning, this is a journey to savour and remember.

The two-day Taste of Ireland itinerary kicks off on Saturday mornings and returns to Dublin 48 hours later. There is also a four-night Legends and Loughs programme that sets off on Tuesdays. The two can be combined for a Grand Tour of Ireland, with ticket prices starting at just over €9,000.

So, now that the thorny issue of ticket prices is out of the way, what do you get for your money, apart from the romance of a train journey inspired by another era? The voyage begins when you check in at the Westbury Hotel off Grafton Street and settle down in the Sidecar bar with coffee and a pastry, awaiting coach transfer to Heuston Station. There, a lone piper leads the way to the train, to the bemusement of CIE passengers. The first of many glasses of Laurent-Perrier Champagne awaits beyond the red carpet leading to the observation car.

After an introduction from train manager Michael McCarthy to the lay of the land – observation car with bar, two dining cars and five state room cars, each named after an Irish county – guests are personally escorted by a staff member to their quarters, and given a guided tour of the facilities.

The 16 twin and four double cabins are surprisingly spacious, and unlike on the Orient Express, there is a shower and WC en-suite. The refurbishments were undertaken in Co Antrim, and the resulting design is Georgian-influenced, contemporary crafted, and extremely comfortable. Attention to detail is everywhere, as evidenced by the recurring Celtic knot motif that appears on everything from the headboard and key fob, to the silverware and china. The duvets are Irish duck down and the throws are Donegal tweed.

By now, we are on the move, trundling past city views familiar from more prosaic Dart journeys, and calling briefly at Connolly Station, where Saturday shoppers peer in the windows and wave. Some of the most scenic countryside of the entire trip – north Co Dublin coastal views leading to gloriously verdant pasture – flashes past as we sit down to lunch in one of the two dining cars.

It’s the first chance to get an idea of who our travelling companions are. As expected, there are a fair few with American accents, but also visitors from Australia and the UK – and a party of eight members of Vienna’s Austro-British Society. Large groups are not unusual, I’m told. The previous week, there was a group of 15 family members from Spain on board, celebrating a birthday.

Lunch is served in the two dining cars – Wexford, with its sunny yellow tones and tweeds, or Sligo, with its slightly more formal air. Serendipitously, Drummond House asparagus features on the menu, just as we trundle past the very fields where Peter and Marita Collier cultivate the crop on their farm in Baltray, Co Louth.

This is not a coincidence. The food served on the Grand Hibernian is described as traditional Irish fare with a contemporary twist, with “menus based on the world-class local produce available from within the counties and regions the train visits”.

Certainly the “traditional Dublin coddle” on the lunch menu bears no resemblance to that on offer in the city’s pubs, with its tiny cubes of free-range smoked bacon, snipped chives and “potato velouté”. But there are well-known artisan producers name-checked throughout the menu at every meal.

Dubliner Mark Bodie, formerly of the Dylan Hotel, is the train’s executive chef, and he and fellow chef Donna Kenny cook not only for the train’s 40 guests, but also for the 20 staff on board, from a compact galley kitchen. “It’s a lot bigger than the kitchen on the Royal Scotsman [another of Belmond’s six luxury tourist trains], so we can’t complain,” Bodie says.

Cooking while the train is moving is the biggest challenge, he explains, and cuts and bruises are a common occurrence. Plating up can also be a challenge in the tight space, with up to 40 guests to be served at the same time. Not only that, but the chefs also do the washing up; there is no kitchen porter on board.

There are two choices of starter and main course at lunch and dinner and the wines are matched to the menus, with a different selection appearing at each meal. Personal preferences are carefully noted by the staff, who magically know each guest by name seemingly minutes after boarding. If you show an interest in wine, bar manager Donal may tempt you to try something from his off-list collection.

But there is no time to get settled in for an afternoon tasting session, because excursions are part of the all-inclusive deal, and once the train pulls in to Belfast’s central station, we’re off in our luxury coach, with tour guide Vincent Butler, to visit Hillsborough Castle.

But it’s not just any old visit. Belmond tries to bring some exclusivity to its activities, so it’s an after-hours, private visit, with a guide. It concludes with drinks and canapes, from the excellent Yellow Door deli, served in the family drawing room, where we peer at a watercolour painted by Prince Charles, and are entertained by a harpist.

Heading back to Dundalk station, where we are to be “stabled” for the night, there’s just enough time to get ready for dinner – dress code is smart casual – before another glass of Champagne in the observation car, the social hub of the train.

There is a congenial, fancy house party feel to the evening, and the fun continues back in the observation car, where an excellent Irish cheeseboard appears on the bar, the cocktails flow, and Irish traditional musicians jump on board to provide the after-dinner entertainment.

Back in the cabin, an itinerary for the following day has magically appeared on my carefully turned-down bed, and it promises another action-packed day, punctuated by morning coffee and pastries, brunch, afternoon tea, and dinner.

Waterford, with a bus transfer to Kilkenny for a tour of the city and afternoon tea in Butler House, is the Sunday destination. It is not mandatory to vacate the train and participate in the excursions, so if you’d prefer to put your feet up in your cabin, you can. There are no TVs, or Wi-Fi, so best bring a book.

There is a slightly more formal air to Sunday night’s dinner, with an invitation to gather in the observation car for canapes and yes, more Champagne, beforehand. As we roll along the tracks in beautiful evening sunshine to Bagenalstown station, there’s a giddy air onboard, with friendships struck up between guests, and a determination to make the most of this second night of luxury.

Late-night drinks, more musical entertainment on board, and another night’s sound sleep in the well-upholstered bed pass by in a flash, and all too soon it’s time to join the Monday morning commuters in Heuston station and jump on a Luas. Back to reality, with a bump.

Marie-Claire Digby was a guest of Belmond.belmond.com/Grand_Hibernian