Tim Magee loves cities and loves food but where offers the best of both worlds? Here are his top picks 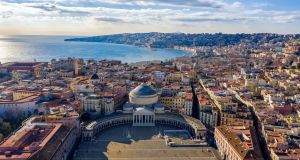 There is no food scene here – scenes haven’t breached this city’s walls: a vIew of Naples from Piazza del Plebiscito. Photograph: iStock

Barcelona and San Sebastian have long topped the gourmet getaway lists but for me the Catalan and Basque big guns both lost their charm a long time ago.

Who will be your dining companions on your gourmet getaway? San Sebastian is now the patron saint of selfies, so if being sardined at a pintxos bar two-deep with rain-coated, phone-eyed minions all reliving the same Food Channel moment is for you, then knock yourself out, but Bilbao down the road is real life, and better value. Bilbao also has the Guggenheim, because there’s more to life than restaurants.

In nearby Atxondo valley, there is Etxebarri and shy, fire god Victor Arguinzoniz’s food is more delicious and original than anything in the constellation of stars that surrounds San Sebastian.

In Barcelona, there is plenty of good food but it’s tricky to get anything remotely local and your dining companion could be the city’s prevailing anti-tourist atmosphere, or one of its many pickpockets.

Some cities have their own gravitational pull. Spending a week, a month or a year in places such as Tokyo or Mexico City hardly scratches the surface of their food culture. That’s refreshing, because the more you know about food, the more you realise you know nothing.

Bologna and Beirut: no bad food

While the megalopolises of Mexico City and Tokyo aren’t manageable by foot. Bologna and Beirut are though, and they have the best-worst food I have experienced – that is, they’re the hardest places to find bad food. Bologna is one great living charcuterie board and in the Lebanese capital it’s harder to find rubbish food than not. That’s an Achilles’ high heel you will trip over in Paris.

Lyon is walkable, worth the trip for the city’s quenelles (those pillowy river fish dumplings) alone, but by day three you’ll need a heart surgeon as your dinner companion.

The Danish capital is in summer. Nordic navel-gazing grazing needn’t be your thing – one of the main edible reasons for the city is the best Mexican food in Europe in Rosio Sanchez’ eponymous Sanchez.

Some of the biggest city names are going through a transition. The city that never sleeps is taking a long nap – New York has always prided itself on a full-on but fickle what’s hot scene, but that is currently in cryosleep.

St John is opening in LA – something I never thought I’d write. The original London restaurant by Fergus Henderson and his partner in spartan perfection, Trevor Gulliver, is 25 years old. Eating in LA is unrecognisable now from a quarter century ago. It still has golden oldies like Langer’s and Musso and Frank, which celebrated being four times older than St John by getting its star on the Walk of Fame recently.

LA’s eclectic but on-the-money obsession with bread, pasta, tacos, sushi, Filipino, Korean, Vietnamese, Thai and now Middle Eastern food, in a city so spread out and diverse, means the only rule is picking one neighbourhood and immersing yourself in it.

Book Felix when you book your flight – the Santa Monica Italian is as hot now as when it opened – or if you aren’t on that side of town, then Antico is savage too. Bavel in the Arts District is the Middle Eastern glitzy warehouse bazaar, with fire and planters in all the right places.

If LA is taco town, its mayor is Sonoratown. If you want a day of tacos – a beautiful thing – then Uber to Burritos La Palma and Tire Shop Taqueria. Take a ticket for roast chicken in Gjusta, queue for warm bread with butter and pan drippings in Republique. Try kaiseki in n/Naka. Put your fine dining drawers on for lovable world-saver José Andrés’ Somni, experimental Dialogue or spacey but entertaining Vespertine. You get the big Technicolour picture.

I spend months every year in Lisbon, a city as lively as it is gentle. Although locals will rightly bemoan higher rents and rising costs, Lisbon still feels local and has an affordable backbone of serious seafood, Iberian pork and the best-value wine anywhere.

This observation isn’t scientific, but despite some horrible histories, Portugal’s relationship today with its ex-colonies feels better than other ex-empire examples. Those colonies are also home to some of the great flavours of the world. Now you can travel to Brazil, Macau, Angola, Mozambique, Goa or Cape Verde, all in one little cracker of a neighbourhood restaurant. Geographia might seem gimmicky but it’s delicious.

The history of Prado is local and it is a superstar in the making. There are more dressy-up places like Alma and Feitoria, but still the ageless José Avillez keeps his nose ahead. I was back in his Belcanto recently in its classy new home and it’s rightly the talk of the town.

Naples has the energy of Marrakech or Bangkok, with the shabby beauty of Havana and the drama of Athens, all held together by a spaghetti jumble of washing-lined tiny streets and lanes. Palermo and Rome are close runners-up but none have Naples’ electricity.

Napoli’s noise and chaos is reassuring, and reminds you every second you are there that this place is a living thing. The best food towns are the ones that people live in, where the butchers, fishmongers and cafes are the neighbours below your apartment. There is no food scene here – scenes haven’t breached this city’s walls.

A trip to Naples is a trip to comfort food, home to the western world’s most popular menu. But there’s a Neapolitan paradox. How you start the day with cake, followed by pizza, pasta and sliotar-sized meatballs and still manage to tackle the hills and squeeze the family onto the scooter is a mystery.

Maybe it’s the coffee. This town towers above any other in its perfection of espresso at 70 cent, strong yet gentle and served from the one-armed bandit machines where everyone is a winner.

A day here begins with espresso and sfogliatella in Gambrinus. Then walk, shop the hundreds of non-chain stores, visit a near-empty museum. Have polpette and Falanghina in Osteria della Mattonella. Stop for espresso. Walk the Lungomare and look over to Sorrento and the imperial retreat of Capri and the real-life view of the image framed in countless Italian restaurants around the world.

Get some Tyrrhenian sea into your blood and then spaghetti alle vongole in the tiny family-run Il Miracolo dei Pesci. Then more espresso. Head home on the stunning metro.

Get dressed up, down an aperitivo in Archivio Storico before an evening at San Carlo, the oldest continuous opera house anywhere. After an enoteca, stop for some wine or a post-opera espresso, share a pizza for just over a fiver in Sorbillo or Concettina ai Tre Santi.