First Look: The Zig Zag is a new place to sit outside in Dublin 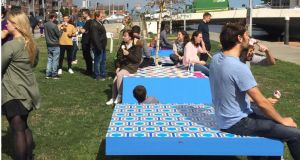 Build it and they will come. Actually, they started coming this week even before the paint was dry – or more accurately, before the decals were fully applied – and sat down to chill almost immediately it was put in place on Thursday.

The latest initiative from A Playful City – which works on making Dublin a more playful and child-friendly city – is what they describe as an inclusive social space, at Spencer Dock in the north inner city, just off the river in Docklands.

Essentially it’s an unusual, playful and visually striking public seating structure and hangout space on a green area running alongside the dock. It’s across from Hubspot on Guild St, a tech company which is working with A Playful City on projects including this social space right across from their offices on Spencer Dock.

The installation is large and strong, a long blue platform which dips and rises, where people can sit, eat lunch, read, climb, chat. It’s zig-zagged in shape – head of design at DIT Barry Sheehan, who designed it, calls it “The Zig Zag”. Bright patterned decals delineate the different areas, and a young tree grows through a hole in the centre. It’s simple and striking – basically a seating area for people to sit, think or socialise. This afternoon, Friday, August 31st, the community is invited to come and enjoy a small party there.

Some 500 workers at marketing and sales software company Hubspot have watched over the glorious summer as kids and teens enjoyed the weather and jumped into the dock across from them, but without anywhere to sit or socialise. So A Playful City’s plan, which emerged from months of talking to people door-to-door, on-street feedback, and working with designers, fitted right in with Hubspot’s observations and the suggestions of local groups – including Little Treasures crèche, the Swan Youth Centre, and Sherriff St youth club and football club and North Wall CDP – that what the area needed was a hang-out and socialising space.

The Zig Zag will be in place for a month or two, while A Playful City and Dublin City Council assess how it goes down and how it is used. Longer term the installation, which cost several thousand to build, will be stored and used again elsewhere.

Just as the seating is finished, Naomi Murphy, A Playful City founder (along with Marisa Denker) and Kate Moran, HubSpot culture programme manager, are checking it out, along with HubSpot’s Rachel Roche and Alex Foster. Earlier Foster was impressed watching the solid structure being built at BA Steel. Even as we chat, someone is already sitting on the other end, looking at the dock.

Indeed, one of the striking things when you look at the surrounds, is that there are no other public seating areas along the waterside. Guild Street is busy, but the green area running alongside the water has nowhere for residents or workers to lig do scíth. While some parts of Dublin city are better served for seating or social spaces, others seem bereft. But Dublin City Council says it is “committed to providing staying and lingering spaces in the city in all areas”. The Heart of Dublin, City Centre Public Realm Masterplan (as well as local plans for the Grafton Street Quarter and the Docklands Public Realm Plan) have “significant open space areas with seating”.

The city is currently in the first phase of the 20-year masterplan, says Siobhan Maher of DCC’s Public Realm. There is a plan for seating and respite improvements for the city core, particularly in Wolfe Tone Square, Temple Bar Square, Liffey St Projects and Docklands.

The process for this Playful City project serves as a trial for what might work at Spencer Dock. Another model of beta project is “parklets”, where city centre car park spaces are converted to seating areas. Parklets are quick and easy to install, and reversible if they don’t work out, she says. The council considers how communities and businesses react, whether areas are used, how sheltered the space is.

For longer term seating there is a long process of trialling and testing and planning - considering wind and light, whether the space will be used, whether antisocial behaviour is an issue – before decisions are made, she says. And not everywhere is suitable; Wolf Tone Square is a wind tunnel, Maher observes. “There is a lot to consider.” There are plans to provide “shelter and greening and design interventions”, including in docklands, and there are 16 projects at various stages in the city.

So down the line, perhaps there will be more extensive social spaces near Spencer Dock.

This afternoon, A Playful City is unveiling the Zig Zag, but even as we’re chatting just after it’s been set in place, a skateboarder wanders by and his eyes light up. He measures the dip in the structure using his board, assessing its use, grins and ambles away. The dip doesn’t look large enough and is too angular for boarding we reckon, but watching the reaction, it’s a good portent for how people may adopt it.