Vogue names Irish woman Sinead Burke one of 25 most influential 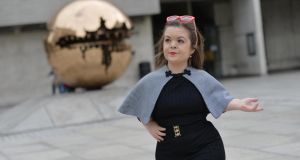 Sinéad Burke: “Her mission is clear,” says Vogue: “To educate designers on how to be fully inclusive in fashion and beyond.” Photograph: Sara Freund

Vogue has named an Irish woman as one of the 25 most influential and aspirational female figures working in Britain. Speaking from London, Sinéad Burke, fashionista, writer and academic, said she was thrilled to be included alongside Meghan Markle, Stella McCartney and other luminaries. “It has been a great, wonderful, exciting secret to keep until today,” she says.

The Vogue citation says: “At 3ft 5in tall, Sinéad Burke, who was born with achondroplasia, is acutely aware of the limits of design – and how to shift them. In 2018, the author and campaigner became a sensation, sitting front row at London Fashion Week and being photographed in Burberry and Dior for magazine covers, while her TED talk Why Design Should Include Everyone racked up 1.2 million views online. Her mission is clear: to educate designers on how to be fully inclusive in fashion and beyond.”

Burke, who appears in a photo shoot with Grace Ladoja, Priyanka Joshi, Karen Blackett and Dua Lipa for the fashion magazine’s July issue, says the list under Vogue’s new editor, Edward Enninful, reflects “an honesty and diversity of those who read magazines. When I was growing up I wouldn’t expect to see myself reflected in a magazine. It is wonderful and surreal to walk by a newsstand and see my face in Vogue and humbling to be on a list of women who are shaping society and pushing boundaries in art, law, science, music, fashion and more.”

Dubbed the Vogue 25, the list of “the women shaping 2018” consists of what the magazine says is “an extraordinary cast of leaders defining – and redefining – the way we live now”. The women range in age from 22 (the singer Dua Lipa) to 73 (Baroness Hale, president of Britain’s supreme court), and includes figures from the worlds of politics, the arts, fashion, media and sport.

Meghan Markle, aka the duchess of Sussex, is among them. After her wedding to Prince Harry this month, Vogue hails her as a person who “captured the public imagination like no other this year”.

The magazine says that Markle – “one of the most recognisable women in the world” – has an influence that “stretches far beyond the ceaseless coverage of her style – as a biracial campaigning feminist from America, she is helping to forge a new 21st-century identity” for the British monarchy.

The environmentalist Orla Doherty, another of the Vogue 25, also has an Irish background. The Blue Planet II and The Deep producer, a specialist in deep-sea filming, has said: “My family is from the rugged coastline of Donegal, in Ireland – so perhaps a connection with the sea was in my DNA.” Vogue says she delivers “a lesson in the art of soft power. On a Sunday night, as more than 10 million people watched the finale of the BBC’s Blue Planet II, an alarming picture emerged of the sheer scale of damage that plastic was causing to our oceans.” The episode, which Doherty produced, “had an instant effect on public consciousness. With campaigns for reusable coffee cups and against plastic straws, she and her team are shifting our behaviour.”

Vogue calls Ruth Davidson, the Scottish Conservatives leader, is praised as a “beacon, thanks to her relatable personality and progressive ideas” among a “sea of old-guard Tories”. It also cites the gay politician’s “spectacular gains for her party in the last Scottish elections” as a reason for her position on its list.

Dua Lipa, who won two Brit Awards this year, after being the first woman to receive five nominations on one night, is described by Vogue as a “culture definer”. “Her hit New Rules, an anthem of female empowerment, laid out a blueprint for modern sex lives and has, to date, had more than a billion views on YouTube,” the magazine says.– additional reporting: Press Association

Ross O’Carroll-Kelly: ‘Críost on a rothar. It looks like Chorlie Haughey’
9