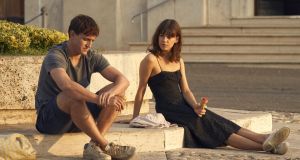 Would it make a person really shallow if their favourite thing about the TV adaptation of Normal People was Marianne’s wardrobe? Asking for a friend.

Rumbled. I am obsessed with everything Daisy Edgar-Jones wears on screen for the whole, blissful 12 episodes. (I have an advantage, as the full series is available on BBC iPlayer here in the UK.) The spaghetti-strap sundress she wears for an afternoon bike ride and an ice cream in an Italian piazza is surely the most delicious ballerina-length black dress since the bare-shouldered satin cocktail dress with the bateau-neckline and the bow-tied shoulders Hubert de Givenchy made for Audrey Hepburn in the film Sabrina in 1954 (a dress so iconic that it is known as the “Sabrina dress”).

Then there is the short A-line tunic in sun-faded gingham Marianne wears by the pool in another scene from that Trieste holiday. With her lush fringe and coltish beauty, the vibe is pure Jane Birkin circa 1969. And the yellow sleeveless blouse in which she bolts in late to the school exam hall, when everyone else is in uniform. And don’t get me started on the cream V-neck blouse with the black silk scarf and the dangling shell earrings.

Normal People is not about clothes. Indeed, lots of the very best bits of Normal People are the scenes where Marianne and Connell have no clothes on at all. But I think we all know by now that Marianne’s sweaty sex hair and Connell’s chain are iconic, so I will spare you more thigh-rubbing.

Maybe it is a marker of how good Normal People is that it is not about clothes yet the clothes are still brilliant. Or maybe it’s because Normal People is not about clothes that the clothes are brilliant. When television makes noise in fashion it is usually for cutting-edge, scene-stealing looks by of-the-moment designers: Villanelle wearing the Vampire’s Wife in the new season of Killing Eve, say. But this show’s Emmy-nominated Irish costume designer, Lorna Marie Mugan, whose previous credits include the stylish and very influential Peaky Blinders, dressed Marianne in a mix of high street and vintage, with a few pieces from Mugan’s own wardrobe.

The show captures the way young women look now. The one-piece swimming costume instead of the bikini, the bedroom loungewear that spans essay-writing and sleeping. The high-waisted jeans, and the short party dresses

The clue to the magic of Normal People is in the name; not the normal part, the people part. Sally Rooney’s fine-grained characterisation of Marianne is all there on the small screen. It’s in her summer-holiday plimsolls and her washed-out underwear, the protective jumpers she wears to the library and her flimsy, over-exposing party dresses.

If Rooney is the first great millennial novelist, Marianne is the first great millennial TV style icon. The show captures the way young women look now. The one-piece swimming costume instead of the bikini, the bedroom loungewear that spans essay-writing and sleeping. The high-waisted jeans, and the short party dresses. Even Marianne’s slenderness – often mentioned in the book – is accentuated in the modern way, in the looseness of a pair of jeans or the leotard fit of a vest, rather than the old-fashioned methods of darted tailoring, or waist-cinching belts.

Mugan wanted to show how teenage style evolves in the years from adolescence to college. “We didn’t want to just shake off everything that was part of their youth,” she told Grazia magazine about how the clothes changed in Marianne and Connell’s move from Sligo to Dublin. “You take little bits of them with them. You explore how they find themselves as they evolve. Subtlety was the key.”

During Marianne’s first year at Trinity College Dublin, and on that idyllic Italian holiday, she is trying on a new sophistication for size. On a visit home to Sligo the high-school princess contemporaries who still wear their hair in shiny prom-night ringlets look calcified next to the modishly tousled Marianne, like once-prized dolls now gathering dust. Trapped at home with her awful family, her wardrobe regresses from Trinity urbanity into cut-off denim skirts and plimsolls.

Edgar-Jones told iD magazine that working with Mugan on Marianne’s wardrobe was one of her favourite parts of making Normal People. “It was so fun,” she says. “When the outfit feels right you can adopt the physicality much more easily, because your clothes kind of dictate the way you navigate the world… As [Marianne] ages, she stops needing to be so out there and feels comfortable to wear clothes that fit and feel good.”

If you have more self-control than me and haven’t gulped down the last episodes yet, I will stop there. But Normal People has the makings of a fashion classic. – Guardian

Normal People is on RTÉ One at 10.15pm today and on BBC One at 9pm on Mondays