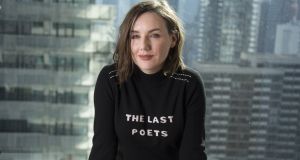 Estée Lauder’s London HQ is widely known as one of the plushest offices in the city. Impossibly glamorous women breeze in and out of the building every day – the staff is 90 per cent female. In the business of beauty, the base line for standard work presentation and personal grooming is high.

The lower ground level has a staff restaurant, store, and nail and blowdry bar to help maintain these high standards, but I’m heading to the top of the building’s nine floors, which boasts a large communal space with spectacular views overlooking London. It is here I meet Sali Hughes and Jo Jones, co-founders of the charity Beauty Banks. The two have just finished giving a talk to impeccably groomed Lauder staff about the initiative.

Within the beauty industry, Hughes is something of a rock star. Among other things, she is beauty columnist for The Guardian with a wide and loyal following. Her good opinion can make a product successful and establish a brand’s reputation. In an industry where online influencers are widely considered to have the most selling power, she is one of few journalists with a significant personal platform and major influence.

Jo Jones is a well-known beauty PR, marketing and communications expert, and the sort of person I would have been intimidated by at school because of her nice hair, inherent confidence and apparent quality of looking like she always knows what she is doing. She has a “let’s get things done” air about her that seems to trundle forward on its own momentum.

The two struck up a friendship after years of working together. When I ask about the origin of Beauty Banks, Hughes smiles. “Jo and I would meet up every couple of months to talk shop. She would turn up with a bag of new beauty products, and we’d have a work conversation. And then, because we’ve become good friends over the years, we inevitably would talk about other things.

“Over time it became less and less comfortable for us to talk about the stuff we were meant to be talking about when we were upset and dispirited by things in the real world. Donald Trump had got in, and the [Brexit] referendum had happened . . . we were feeling quite despairing. As much as Beauty Banks does good, it’s not an entirely selfless act. I think we’re both people who, when the world feels chaotic and upsetting, have to have some kind of control over what happens, and think ‘well, what can we do?’”

Beauty Banks collects and distributes unused toiletries to registered charitable organisations throughout Britain, who then distribute them to clients experiencing hygiene poverty, a scenario in which many have to choose between food and the sort of basic hygiene products like toothpaste, body wash, sanitary products and deodorant that most of us take for granted as fundamental components of functional life.

Beauty Banks has to tackle attitudes toward beauty as flippant, however, to do its work.

“When people think about beauty,” Jones says, “they think about it as lipstick and mascara. They don’t think about it as deodorant or body wash, shaving gel, razors. I went to a school recently to do a talk and said to the kids ‘Just reimagine your day, waking up and not being able to brush your teeth, wash your hair or use deodorant.’ Even people who think they don’t engage with ‘beauty’ do. They have their hair cut regularly, they shave regularly – that’s all beauty. That’s all grooming.”

The basics of beauty are essential to everyone, but Hughes and Jones are also up against the idea that hygiene poverty isn’t a legitimate problem. Hughes, having the more public profile, gets the brunt of these opinions online. Misunderstandings about hygiene poverty, she says, make tackling the problem that much more difficult.

“We deliberately haven’t opened a Beauty Banks account on Twitter because of the level of abuse . . . what people really don’t understand and I wish they would is how much of a huge problem working poverty is. People work all the hours they possibly can and they literally cannot make ends meet.”

These people, she suggests, are not unusual at all. “I always think that there would be a massive shift in perception if everybody volunteered for two hours in a food bank and saw people who look just like them, and families who look just like their families,” she says. “Within the abusive vocal minority, most think that poverty doesn’t exist – ‘Go and get a job’. Most people are only two pay cheques away from homelessness . . . if you don’t get paid for a couple of months, if your business runs into problems or if you lose your job or become ill, you can find yourself right on the precipice.”

Beauty Banks is making a real impact on hygiene poverty in the United Kingdom, and expanding quickly. While here at home we have organisations like Homeless Period Ireland, which works to provide sanitary towels and tampons to women in Ireland who are in severe financial difficulty, period poverty is just one aspect of hygiene poverty, and we do not have an organisation to rival Beauty Banks.

When I ask about the possibility of an Irish version of Beauty Banks, Jones and Hughes are enthusiastic. “If somebody wants to start it in Ireland,” Hughes says, “we can provide our branding and they can set up an outpost . . . If people want to collect and distribute, we will chum them up with a local charity, we’ll provide the posters, we’ll put them on our social media. We can completely set them up, but we’d need someone reputable to take the initiative – a business, a journalist or maybe a PR agency.”

The demand on Homeless Period Ireland alone indicates that the appetite for basic hygiene products among those in financial distress is certainly present in Ireland.

Beauty Banks is a product of our times; Hughes and Jones’ response to feeling powerless and their effort to use what they know and leverage what they can to help people in such a basic way. They understand the health effects of being unable to keep oneself clean, but often ignored are the self-esteem and social consequences.

We isolate ourselves from others when we know we smell, or when we feel scruffy. A day that begins without the ability to wash is much harder to embrace or thrive in. Providing someone with soap or toothpaste when they cannot afford to buy it is small but deeply impactful.

Despite the grim necessity for Beauty Banks, Hughes and Jones maintain that the response from the beauty industry and general public has restored their faith in people. Easho, an online company that sells toiletries wholesale, has partnered with the charity. They take orders from anyone who wants to donate, and deliver them in bulk to Beauty Banks or their chosen charity partners.

“Good people have found us,” says Jones. “When you put good out, you get good back. We have one of the best design agencies in the world – Design Bridge – doing our branding for nothing. They’ve built our website, done all our sloganeering – stuff that we could never have afforded. Probably £150,000 worth of work for free. Beauty brands have donated products, money and time. Lawyers approached us and work for us pro bono.”

Good people, Hughes argues, can go unheard in the current climate, but doing something to make an impact on the negativity around us both comforts good people and brings them out into the world.

“A charitable endeavour brings those people out in force, and we are confronted with them every day. On a political scale, you look at the internet and you think it’s far right versus far left, but actually when you do something charitable, you realise that all the people who aren’t shouting make up the majority of the country and they’re just people who want to do a good thing. They’re just people who want things to be better, and who want to crack on and step out of the noise. It’s really gratifying, and it makes me feel better.”

From friends driving donations across the UK, to people volunteering to pack beauty products for delivery, Beauty Banks has built a pragmatic community within an industry often dismissed as focused on frivolities.

As we part ways, Jones summarises the endeavour perfectly; “When stuff is really sh*t, you just anchor yourself in that decency. That’s what we are doing.”