Climate crisis: Welcome to One Change, our new column 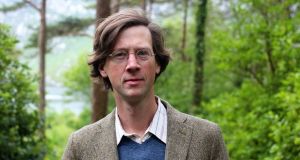 Manchán Magan:'Even our children know by now that curbing air travel, eating less meat and changing how we heat our homes can have profound impacts.'

Somewhere inside of all of us is the power to change the world, though we rarely consider it. Our greatest achievements have all been accomplished by individuals standing up for what is right.

Our daily actions are a form of voting – the choices we make either support the status quo or signal to those around us, from our friends and family, to politicians, big business and the media, that we are committed to change and willing to take steps to achieve it.

Whether the worst excesses of climate change will be alleviated over the next few decades will be determined by those who show up to take action. So far in Ireland only a tiny, tired group of environmentalists have actively been pursuing the steps of lessening their dependence on carbon, and so politicians and businesses have been able to ignore them with impunity.

It’s up to the rest of us now. The entire system of farming, energy production, transport and waste management that currently subsidises and supports the fossil fuel industry will need to be transformed if humanity is to survive and thrive.

We may feel our actions and votes are inconsequential, yet the truth is that major systemic change has only ever been achieved by the compounding force of individual action. Politicians will do nothing unless we demand it. They have clearly shown this so far.

Though much of modern life is about lulling humans into thinking we have no agency, that any personal effort by one among the seven billion of us is futile, the reality is that each of us is as central to existence as the wasp that stings the driver, waking her as she is about to steer the school bus off a cliff.

Over the next few months, writing this column in turn, Sorcha Hamilton and I will aim to highlight individual steps we can take to spearhead environmental and social change in this country and the wider world.

Little of the information will be novel or new (even our children know by now that curbing air travel, eating less meat and changing how we heat our homes can have profound impacts), but if a significant majority of us were willing to try to follow these steps, we can foment a process that will transform this country from being one of the highest greenhouse gas emitters per person in the world, to an island that is more sustainable, equitable and beautiful than we can now imagine; making ourselves healthier and more at ease, while creating a society that is inclusive, supportive and offers warm housing and adequate healthy, locally-grown food to every citizen.

We have the power, we just need to stop convincing ourselves that we don’t.

Manchán Magan is a writer and documentary-maker. He has written books on his travels in Africa, India and South America and two novels. He  has presented dozens of documentaries on issues of world culture and heritage for TG4, RTÉ  & Travel Channel. In 2016 he ran in the general election for the Green Party. He lives in his oak forest with hens and bees in a self-made hovel in Westmeath. manchan.com