Ada Hegerberg and the twerking joke: why we shouldn’t let it slide 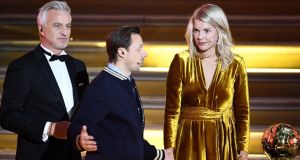 It was the moment Ada Hegerberg, a 23-year-old Norwegian striker with Olympique Lyonnais, had dreamed of. She had just become the first woman to be awarded the women’s Ballon d’Or, soccer’s most prestigious honour, having scored nearly 300 goals in her career. She had just given a rousing speech about what a big deal this was for women’s football, and how she wanted young girls to believe in themselves. And then, as she finished her speech, the French DJ Martin Solveig, one of the evening’s hosts, turned to her and asked, in French, “Do you know how to twerk?”

In the video of the incident, which has been widely shared on social media, there’s a nanosecond when she looks at him, utterly disbelieving. Then she shakes her head and turns away, leaving Solveig to cackle at his own joke. She ultimately ended up dancing to a Frank Sinatra song.

You can predict what happened next: the headlines that should have been hailing Hegerberg’s achievement, and what the Ballon d’Or means for women’s sport, were instead co-opted by a row about sexism.

A slew of international athletes pitched in on how inappropriate the interaction was. The tennis star Andy Murray wrote in an Instagram story: “What questions did they ask mbappe and modric? I’d imagine something to do with football. And to everyone who thinks I’m overreacting and it was just a joke... It wasn’t. I’ve been involved in sport my whole life and the level of sexism is unreal.”

Lindsey Horan, a US midfielder, tweeted: “This is an absolute joke. Unbelievable. She just won the first ever Ballon D’Or for women. @AdaStolsmo Congrats and you do not deserve this bs.”

Hegerberg’s insistence afterwards that she was not upset did nothing to assuage the uproar. “He came to me afterwards and was really sad that it went that way. I didn’t really consider it sexual harassment or anything in the moment. I was just happy to do the dance and win the Ballon d’Or.”

This is an absolute joke. Unbelievable. She just won the first ever Ballon D’Or for women. @AdaStolsmo Congrats and you do not deserve this bs. https://t.co/f5LDlfsVM5

Sincere apologies to the one I may have offended. My point was : I don’t invite women to twerk but dance on a Sinatra song. Watch the full sequence People who have followed me for 20 years know how respectful I am especially with women pic.twitter.com/pnZX8qvl4R

Solveig later acknowledged, kind of, that he shouldn’t have said it, in a video replete with heavy sighs and a poor-me expression on his face. “I of course didn’t want to offend anyone. This comes from a distortion of my English level, and my English culture level,” he said – bizarrely, considering the exchange was in French to a Norwegian athlete in front of a global audience at a French award ceremony. It was “probably” a bad joke, he conceded. But, for pity’s sake, enough about Solveig.

This is a tricky one. On the one hand, it is depressing how often this happens with women in sport: they achieve something remarkable – Hegerberg helped Olympique Lyonnais win their third straight Uefa Women’s Champions League last year – and then it gets overshadowed by someone else’s bad behaviour.

Just ask Naomi Osaka, whose US Open victory over Serena Williams got a fraction of the coverage earned by Williams’s on court outburst. “I couldn’t tell what was going on, it was so loud and a little bit stressful,” Osaka said about the incident afterwards, adding that it was her first time winning a grand slam, so she didn’t know how she should feel. “For me, I don’t feel sad because I wouldn’t even know what I’m expected to feel… I don’t think I even thought about feeling sad, because there’s no experience for me to draw on [from] any other grand-slam final.”

There’s a risk of infantilising women when you decide to be upset on their behalf, especially when they say they weren’t bothered or aggrieved. When you claim offence that they have said they didn’t feel, you’re effectively suggesting their feelings don’t matter. You’re taking away their agency.

The joke was directed at her, but it was heard by millions of young women and little girls – and young men and little boys – watching at home

But every woman knows that, no matter how fierce you might be on the soccer pitch or in the boardroom, your first instinct when confronted with such bald sexism is often to ignore it, or to avoid making a fuss.

I’ve had numerous conversations with women where they’ve recounted something wildly inappropriate or deliberately uncomfortable that was said or done to them. When you ask what they said in response, the answer is often: “Nothing, I was too shocked.” I know: I’ve used those words myself. (One friend has developed a much more useful riposte to locker-room comedians than stunned silence. “I’m sorry,” she says, sweetly. “I don’t understand why that’s funny. Can you please explain it to me?”)

The alternative to us all calling it out is to let that kind of lazy, “can’t you take a joke?” misogyny slide. We’ve been doing that forever, and it hasn’t worked out too well for us.

The twerking joke matters, even if it didn’t offend Hegerberg, because she wasn’t the only audience for it. It was directed at her, but it was heard by millions of young women and little girls – and young men and little boys – watching at home.

However she might personally have felt about it, they need to understand it is unacceptable to treat a world-class athlete as though her greatest achievement is being a repository for male desire.

They need to hear that it is not okay to suggest that the way she moves her hips is more important than how she works her feet and her brain on the soccer pitch, or that her sexuality matters more than her hard work, dedication and innate intelligence.