Why the Famine Irish didn’t emigrate to South Africa

A ship carrying Irish convicts arrived in Cape Town in 1849. They never made it ashore 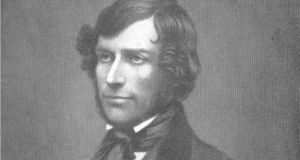 Prisoners on board the Neptune included Irish nationalist John Mitchell, who preached social revolution in Ireland during the Famine. He later became a proponent of slavery in America and supported the Confederate States during the American Civil War. Photograph: Wikicommons

Towards the end of 1847, the worst year of the Great Irish Famine known as “Black 47”, an exhibition opened at the Rotunda in Dublin depicting the Bosjesmans, or “bush people”, from southern Africa. This touring exhibition, which featured a family of five, was widely publicised, as curious visitors flocked to learn more about the African interior.

The exhibition furthered stereotypical views of Africa, and in particular the Cape of Good Hope, making it a less attractive option than America for emigrants looking for a destination abroad to flee the ravages of the Irish Famine.

But six thousand miles away in Cape Town, another incident in 1849 ensured that the Famine Irish were not welcome.

In 1848, British colonial secretary Earl Grey proposed that convicts (most of whom had been convicted in Ireland for petty crime during the Famine) should be sent to the Western Cape, initially to help build the city’s breakwater and other maritime projects, but eventually to be allowed reside there. What followed could hardly have been expected by the Earl.

On May 16th 1849, following a large protest meeting, an Anti-Convict Association was formed in Cape Town and almost 5,000 people signed a petition against establishing a penal colony. Despite the protests of the colonists and sympathy of the governor, Sir Harry Smith, Earl Grey pushed ahead with plans to settle convicts at the Cape, and instructed the ship, Neptune III, to depart from Bermuda with 300 passengers on board, including the infamous Irish nationalist John Mitchel.

Reaching Cape Town in September, the 282 prisoners (18 died at sea) and crew, numbering 55 people, were made to endure a five-month stay off the coast within sight of dry land. Vigilante groups roamed Cape Town coercing people to sign the Anti-Convict pledge, and desist from having any dealings with those who would not sign. Lawlessness prevailed and Cape Town was engulfed in riots. For the prisoners on board the anchored Neptune, an unlikely hero came to their rescue.

Born in Ballinastanford near Claremorris in Co Mayo in 1806, Robert Stanford was a career soldier who served in Burma, and in the Frontier Wars in the Eastern Cape in 1835-36. Retiring from the army on half-pay in 1838, he bought the Kleine Valley Estate in the Western Cape, amounting to 26,807 acres.

Stanford was amongst the most enterprising of the Cape colonists. In 1848 he purchased another holding of more than 52,000 acres at a place called Gustrouw, which he intended to rename Ballinastanford, in honour of his homeplace.

While Stanford originally supported the blockade of the Neptune, he finally relented to a plea from the governor of the Cape, the Derry-born William Porter, to offer assistance. This, Stanford believed, would bring “timely assistance” and thus “open rebellion and civil war would be averted”.

Over the course of the next five months, Stanford and some others ran the gauntlet, supplying the ship with supplies. But his actions proved wholly unpopular, and before long, he had become a pariah in the locality. Passing through the streets, his family were pelted with eggs, his children expelled from school, and he was refused medicine for his family, resulting in the death of a child.

By February 1850, Earl Grey realised a resolution could not be reached and he ordered that the Neptune continue on its voyage to Van Dieman’s Land (the name used by Europeans for the island that was renamed Tasmania, in 1856).

In his memoir (later published as Jail Journal) John Mitchel wryly remarked about the stand-off in Cape Town : “So the contest is over, and the colonists may now proceed about their peaceful business. Long may they sleep in peace without bolt or lock on their hospitable doors!”

The story of the Neptune and the standoff was a pivotal moment in the history of South Africa, and that of the Famine Irish. Although emigration continued from Ireland to South Africa in the decades after, undoubtedly the incident slowed the numbers travelling there.

In August 1850, Robert Stanford was received at court by Queen Victoria and knighted for his services during the standoff. As partial compensation for the troubles he had endured, both financial and otherwise, he was given £5,000.

Not content with how he had been treated by his former friends, neighbours and countrymen and still reeling from all that he had lost, in 1858 Stanford published a memoir, Loyalty and its reward, which understandably had a mixed reaction in the Cape Colony.

On December 20th 1877, Stanford died while visiting Charlton-upon-Medlock in Lancashire, England. Today, the village of Stanford, about 120 kilometres from Cape Town, bears the name of the Co Mayo man who came to the aid of his fellow countrymen 6,000 miles from home.

Dr Ciarán Reilly is a historian of 19th and 20th century Irish history and has written extensively about the Great Irish Famine and the Irish diaspora.

Róisín Ingle: How Taylor Swift helped me navigate the puzzle of parenthood
3