‘I was a machine gunner, guarding high value assets, such as the US president’

Dubliner Robert Keogh served with the US Coast Guard, as well as being attached to a special security team 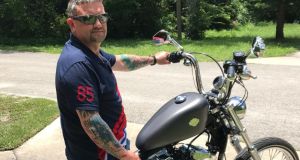 Robert Keogh, originally from Dublin, completed two academic degrees while serving with the US Coast Guard

Working Abroad Q&A: Each week, Irish Times Abroad meets an Irish person working in an interesting job overseas. Here, Robert Keogh shares his experience of patrolling oceans with the US Coast Guard, serving in the Middle East, and being a "machine gunner".

Where are you from?

I was born in Dublin and my first emigration in life was to Celbridge in Co Kildare, when I was in fifth class in school.

I’ve always had a bug for travelling. Just after finishing an apprenticeship as an electrician, I jumped on a plane to sunny San Diego, California, to join a gang of J1-ers, most of whom I knew from playing rugby at my local club Barn Hall.

I fell in love with the place. Sun, sand and sea. I was fortunate enough to have a visa to work in the US and after making a few calls from a pay phone booth (no cell phones back then) on Pacific Beach, I did a phone interview with a local electrical company.

I met the guy the following morning and found out the chap was a Dubliner. He’d been in the US almost 20 years and had lost his accent. Long story short, I’m now godfather to one of his kids and going to visit him in the near future.

I stayed on in the US after the lads had to return to college. I did about a year but got homesick, so I ended up back in Ireland.

That wasn’t the end of your wanderlust, was it?

After a few years of the grind of being a ‘sparks’ for the ESB in Dublin, the travel bug hit me again. I spent a year in Australia. But it didn’t call me like the US did. Maybe it was the distance from Ireland, or the people. I just knew I was happier in the US.

What did you do for a job on your return to the US?

I was a Petty Officer, which is a non-commissioned officer, equivalent to the rank of sergeant, in the US Coast Guard. The USCG is less like the Irish Coast Guard but more like the Irish Navy. The job involved so many different missions but simplified into either law enforcement or search and rescue.

I’ve been stationed on a large ship that patrolled the Pacific for everything from drug interdiction to human trafficking. I was a ship’s administrator and part of the law enforcement team that would board suspect vessels.

I even wound up in Alaska, on fisheries protection. The TV show Deadliest Catch, well, we were behind the cameras. No glory for us – we were just there to keep the Russian ships out, sometimes inspect the catch for size of fish and crab, depending on the season, and the occasional rescue if our onboard helicopter could make it in time. The ship’s home port was Honolulu, Hawaii – that was the silver lining.

I was also a machine gunner, attached to a security team that would travel the US guarding high value assets, such as the president, or the UN building. Specific missions, I am not at liberty to discuss. But it was water side security.

Where were you based?

I’ve been stationed all over the US, east and west coasts, as well as Hawaii. I have patrolled the Pacific, the Baring Sea, and the Middle East.

Did moving to the US offer you better personal development and employment opportunities than if you had stayed in Ireland?

The US armed forces paid for my two apprenticeships and two degrees. (I had to make up for dossing away a good secondary school education in Ireland).

Are you now a US citizen? Do you consider yourself to be Irish or American?

My government job fast tracked my path to US citizenship. I’ll always be an Irishman. But I am a very loyal and proud American citizen.

Given that you are an immigrant, who worked in law enforcement, what are your thoughts on the US’s current policy regarding immigration?

Put it this way, I might do a brick laying apprenticeship. I heard there’s a big job coming up on the border.

On a serious note, I empathise with anyone who has come to this great country illegally and works hard for a better future for themselves and their families. The only difference between them and me is a piece of paper. I strongly believe there should be a path to amnesty to remain in the US, if you have worked and paid taxes and never been arrested.

I’m in sunny Florida and hope to stay here.

If you work in an interesting job overseas and would like to share your experience, email abroad@irishtimes.com with a little information about you and what you do.

Trump extends immigration restrictions, bans J1 and other visas until end of year