The Kildare woman who blazed a global trail for female scientists 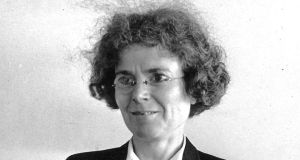 Kathleen Lonsdale (photographed in 1943) was made professor of chemistry at University College London in 1949, the first woman professor at the university. Photograph: The Irish Times

A new weekly series for Irish Times Abroad profiles an Exraordinary Emigrant from Irish history, based on entries from the Royal Irish Academy’s Dictionary of Irish Biography.

Kathleen Lonsdale blazed several trails for women in science. She wrote publicly about the changes society needed to make so that women could succeed in both their domestic and working lives. Later in life she also became a leader in the scientific community’s defiance against war.

She was born in 1903 in Newbridge, Co Kildare, youngest among 10 children of postmaster Henry Yardley and his wife, Jessie Cameron. Cameron took the children to England in 1908 and Kathleen won a scholarship to the high school for girls at Ilford. She was the only girl who opted to take classes in physics, chemistry, and higher mathematics at the boys’ school.

She was a brilliant, determined student. Aged 16 she entered Bedford College for Women in London, studying mathematics. She gained a University of London scholarship, and transferred to physics, because she preferred experimental work. In 1922 she came first in the BSc exam, and came to the attention of Nobel Laureate WH Bragg, one of the examiners, who offered her a position on his research team at University College, London.

There she worked on X-ray diffraction of crystals. With a fellow student, WT Astbury, she published a major contribution to crystallography aged just 21. She earned her MSc and a PhD.

In 1927 she married Thomas Lonsdale, an engineering research student at UCL, and moved to Leeds. Somewhat unusually for the time, Thomas Lonsdale encouraged his wife to continue her scientific work, and she joined Leeds University chemistry department as a part-time demonstrator. There she made her most important contribution to chemistry by proving, by X-ray diffraction of crystals, that the benzene ring was flat. She was also first to use Fourier analysis of X-ray patterns to study the structure of an organic molecule, hexachlorbenzene.

The Lonsdales’ first child was born in 1929, and they returned to London. Two other children followed, but Kathleen managed to continue her research, working on calculations at home while they were babies. She then took a post at the Royal Institution as research assistant to Bragg. She worked on magnetic anisotropy in crystals, and pioneered divergent beam X-ray photography for investigating their structure.

She was made professor of chemistry at UCL in 1949, the first woman professor at the university. Lonsdale’s initiatives were copied in other universities. She developed her own research group, with interests including bladder and kidney stones. She also worked on synthetic diamonds. A 1936 book contained important development of her work with Astbury.

In 1945, she and the biochemist Marjory Stephenson were chosen as the first female fellows of the Royal Society; she was vice-president in 1960. Lonsdale was awarded the society’s Davy Medal, its preeminent award in chemistry, in 1957. In 1968 she became the first female president of the British Association for the Advancement of Science. A rare form of hexagonal diamond, found in meteorites, was named “lonsdaleite” in her honour in 1966.

After their marriage, both Lonsdales became Quakers. Kathleen refused to register for civil defence duties which would have helped the war effort, and was fined £2. When she refused to pay, she was committed to Holloway prison for one month in February 1943. Her experiences there led her to become an advocate of prison reform. During the war she opened her home to refugees from Germany.

In later life Lonsdale became concerned about the role that science was being asked to play in military preparations, and helped establish both the Atomic Scientists Association and the Pugwash movement, seeking an end to armed conflicts. Her 1957 book Is Peace Possible? supported total nuclear disarmament. She was a vegetarian and a teetotaller.

In 1965 she moved with her husband on his retirement to Sussex, commuting to London until 1968. She continued to publish almost until her death in April 1971. In 1981 the chemistry building at UCL was renamed the Kathleen Lonsdale building. She is commemorated by the British Crystallographic Association in an annual lecture.

Based on Enda Leaney and Linde Lunney’s biography of Kathleen Lonsdale (edited for this article by Clare McCarthy) in the Royal Irish Academy’s Dictionary of Irish Biography.