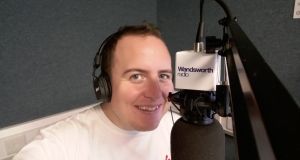 Kealan Duignan on air: ‘I wanted to make an Irish radio show, relevant to the younger generations of Irish people that have emigrated to London in recent times, rather than a show that was all country music and death notices.’

In the autumn of 2015 I decided to take up a new hobby. After producing television shows for a living for the previous 13 years, I thought I could turn my hand to producing a radio show pretty easily.

My local community radio station in London, Wandsworth Radio, had just set up and were advertising for volunteers. Their studio was above a charity shop about a 10-minute walk from my flat, so I popped along to an open day.

When they asked me what type of programme I wanted to make, I said I’d love to make an Irish radio show, relevant to the younger generations of Irish people that have emigrated to London in recent times, rather than a show that was all country music and death notices, as is typical of Irish community programming already present on some British radio stations.

The station director loved the idea, and the following month, The Irish Jam went to air.

For the very first show I called in a favour from my old college pal, Hardy Bucks star Martin Maloney, to do a live interview over the phone. I also reached out to my fellow Kildare man, comedian Jarlath Regan, whose podcast An Irishman Abroad had just hit the 100 episode mark and was a big influence on my newfound interest in podcasts and radio. He was sound enough to do an interview with me over Skype and even sounder to record it for me and email it over afterwards, as I didn’t have a clue how my new audio software worked.

My approach to producing the show has always been to include at least three or four interview items, and devote the rest of the time to music, with a playlist made up entirely of Irish artists. Some weeks we lean heavier on the music but that’s not a problem considering the rude health of the current Irish music scene.

Every week we receive lots of emails from Irish artists trying to promote their music in London, and we are happy to help by playing and talking about them on The Irish Jam.

St Patrick’s Day has become an annual opportunity for us to showcase what we’re about in a live public setting. On March 17th 2016 ago we held our first St Patrick’s Day live show in a beer garden in Clapham Junction, featuring comedian Eleanor Tiernan and musician Shauna Tohill from the pop group REWS. Niall Jackson, aka musician Swimmers Jackson, also appeared on that live show and I subsequently recruited him to be my regular co-presenter.

Last year we threw a St Patrick’s Day party in a pub in Battersea with Choice Prize nominated DJ and producer Bantum headlining the bill.

This year we are honoured to be curating a night of alternative Irish music at the Irish Cultural Centre in Hammersmith called An Oíche Eile, on Friday March 16th. We aimed high by asking the Delorentos to headline and were over the moon when they accepted. The rest of the bill is made up of one of the most exciting Dublin bands at the moment, Pillow Queens, and two of the best London-based Irish acts we know of, Video Blue and Tayne.

My wife is constantly telling me that my hobby has taken over my life, but she recognises as I do that it is now part of who I am. Keeping up to date with the ever-evolving Irish music scene and the Irish arts scene in London is pretty time consuming. Researching, editing, presenting and producing the show every week, on top of my full-time TV job, doesn’t leave me with much spare time but I’m committed to a hobby that fulfils me deeply. Every one of the 100 Irish Jam episodes have helped connect me with some of the most amazing people in the Irish community in London.

I’ve recently had to recruit some new contributors to help make the show, as I’m going to become a dad in June, and no matter how much I love my metaphoric baby it will never be as important as my real baby. I’m not sure how much time I’ll have for hobbies come the summer!

The Irish Jam airs on WandsworthRadio.com   every Tuesday 10pm-midnight.