Florida shooting raises questions again about gun control, but nothing will be done 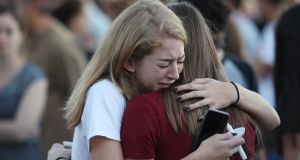 A candlelight vigil for victims of the shooting was held in Parkland on Thursday. Photograph: Joe Raedle/Getty Images

On the 45th day of this year, the 18th US school shooting occurred. This time in Parkland, Florida. This averages out to about one school shooting every 60 hours, or two and a half days. And not one damn thing will be done about it. Not a damn thing.

We’ve gone beyond calling out politicians who take money from the National Rifle Association and then tweet out their “thoughts and prayers” when children are murdered. US lawmakers, and the voters who put them there, are past the point of caring what happens to kids in this country.

The Second Amendment of the US Constitution, as passed by the Congress and preserved in the National Archives, reads as follows: “A well regulated Militia, being necessary to the security of a free State, the right of the people to keep and bear Arms, shall not be infringed.”

This short sentence was adopted in 1791, before electricity was invented, or cars existed, or assault rifles and automatic handguns were created. It was written at a time when it was legal to own and enslave black men, women and children, and not terribly long after witch-hunts had fizzled out.

There is a deep, deep loyalty and reverence given to the Second Amendment in the US that is not shown to other constitutional amendments. Guns are more important than bodies. That’s the message. The right to keep and bear arms is an incredibly sensitive subject in the US that I have spent a decade living here trying to understand. 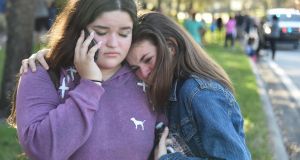 Irish parents in Florida: ‘Is my quest to live in paradise a danger to my family?’ 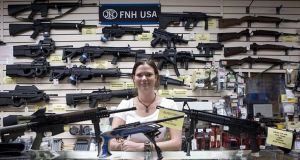 To get to the heart of why America’s gun violence problem is so staggeringly bad, we need to look further than the people who own weapons. We need to talk about why Americans are so attached to this fiercely held belief that ownership and access to guns is their right. Some will actually say it’s a god given right, but a god didn’t write their constitution, a group of mortals did.

The United States is a relatively young country. The Declaration of Independence was signed in 1776, which makes it 241 years old. As democracies go, that’s a pretty short time. Long, bloody wars were fought here to gain independence, and then to abolish or maintain slavery, depending on your perspective. Foreign wars were fought. World wars were fought.

There has been fighting and violence in US culture since its inception, as there has in many cultures. But that one sentence seems to be the hook to hang endless gun violence on. If you are an American citizen, you have the right to bear arms. Not a word about responsibility, just, the right.

The verbiage has been parsed apart over and over again. To me, it doesn’t really matter what way one person or another reads it. What matters is that the conversation is about a person’s right. It’s individual. There is no consideration for the greater good, there are no allowances for the society as a whole. The result of this is a culture, a country, which values the individual rights of a person over the welfare of an entire nation.

Not all laws are good. And not all laws are relevant to the rub-on-your-phone, swipe right or left, 45 rounds of bullets per minute world we live in now. It is important to remember when exactly laws are adopted because if it was legal to own another person at that time, chances are it might be a little out of whack with our moral evolution.

If the law is about justice, and justice is about restoring balance, then something is wrong here. The US needs to evolve beyond its youthful need for individual rights and protections into a place where children in schools are safe from guns.

We can’t wait another 60 hours until the next school shooting. There is no more time left on this clock. There are no prayers that can fix this. There are no thoughts that can change it. There are only actions that can be taken. Children’s lives are at stake and it’s high time we put some adults in the room to make some grown-up decisions.