Ballot to decide if diaspora should be allowed vote for president 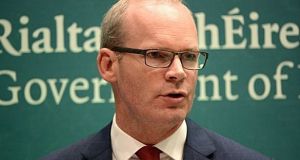 Tánaiste Simon Coveney is one of two Ministers who have been given approval to draft the general scheme of a Bill to amend the Constitution to allow the Irish diaspora a vote. File photograph: The Irish Times

Irish voters are likely to decide on whether or not to extend the vote in presidential elections to Irish citizens abroad in October.

Tánaiste Simon Coveney and Minister for Local Government Eoghan Murphy have been given approval to draft the general scheme of a Bill to amend the Constitution to allow the Irish diaspora a vote.

If the referendum is to adhere to Taoiseach Leo Varadkar’s preferred date of October, the full Bill will have to be published by the end of July, along with the proposed amending legislation. This will allow enough time for a referendum commission be established and have sufficient time to conduct its work.

That will involve a lot of work. The proposal will be scrutinised by the Oireachtas committee on foreign affairs before the heads of Bill are published. The full Bill will then need to be signed off by the Government ahead of its last meeting before the summer break, which is provisionally scheduled for mid-July.

Over three years ago, in 2016, the Convention on the Constitution, while declining to reduce the term of the presidency from seven years to five, voted in favour of extending the vote in presidential elections to Irish people living abroad.

That decision dovetails with the Government’s Global Ireland 2025 policy, which wants to harness potential of the large and diverse Irish community living abroad.

The Government has said that many countries worldwide already provide for voting by those of their citizens resident outside the State.

In a statement this week, the Government said: “The presidency serves a very different function to the Dáil and Seanad. This referendum will be about reimagining a presidency for the 21st century, a presidency that represents the Irish nation not just the State, and that is elected by all citizens.”

Such an alteration will involve many logistical changes. The period of the election campaign will be extended from 60 to 90 days. This will allow sufficient time for a postal ballot to issue to electors resident outside the State and for ballot papers to be completed and returned in good time for the election.

What about Northern Ireland?

There are many other practical hurdles to surmount in advance of the next presidential election in 2025, should the referendum pass. Those will include the registration of voters from outside of the State, how they would vote, and where they would vote as well as extensive information campaigns. There would also have to be arrangements for counting potentially hundreds of thousands of postal votes.

However, the biggest material change will be that voters in the North will be able to vote in presidential elections. That has the potential to hugely influence the outcome.

Groups representing Irish emigrants have long campaigned for them to have voting rights. There has been a debate on the merits of extending the franchise. Some have argued against allowing Irish citizens living abroad to vote in general elections on the basis they do not have to experience the government that has been elected, or are not fully aware of the actual situation on the ground in Ireland. In 2011, an online poll conducted among Irish emigrants based in the US suggested that their preference for the presidency was David Norris. There are an estimated one million Irish citizens living abroad.