Welcome to my place ... Almuñécar, Spain

‘With 320 sunny days a year, and a free tapa with every drink, it’s easy to settle here’ 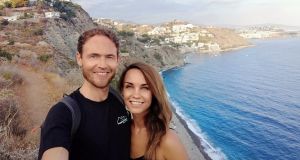 Robin Meredith in Almuñécar, a small town on the coast of Granada where he lives with his girlfriend Ieva

Robin Meredith is from Ballinteer in Dublin. After living in Australia for two years, he moved to Granada in Spain, where he has lived for more than six years. He worked as an English teacher until last year, when he moved to Almuñécar, a small town on the coast of Granada, to start a fitness holiday company (tropicalcoastbootcamp.com). He lives with his girlfriend Ieva.

I like that a line of six cars on the road is considered traffic, and that the pace of life is relaxed yet energetic. I love that most of the locals don’t speak English so picking up a few words in Spanish is essential to get by. We are an outdoorsy couple so living next to the beach and mountains is ideal for us. Living in a place where a free tapa comes with every drink, and an average of 320 sunny days a year, it’s not too difficult a place to settle in.

Where is the first place you bring people when they visit Almuñécar?

To Peñones de San Cristobal, a large rock which separates the town’s two main beaches. At the top of the rock are great views of the town, the castle, the mountains and the coastline. When you come back down the steps there is a nice chiringuito (beach bar) close by, the perfect place for a relaxing chat over a coffee or beer.

Wh are the top three things to do in Almuñécar that don’t cost money?

To walk the old fisherman’s path to Marina Del Este. It’s a stunning hillside coastal walk with magnificent sea views, great for dolphin spotting. It ends at a small, picturesque marina, worthy of a photo or two. What’s great is that not many people walk the path as they’re unaware it exists.

Secondly, a walk through the old part of town is a must. Start at the bottom where the shops, bars and town hall are and then take a turn up one of the narrow, steep streets until you find your way to the castle at the top.

Friday is market day in the town. It’s your typical Spanish outdoor market selling anything from clothes to washing machines. My recommendation, however, is to visit the flea market on Sunday morning. It’s full of weird and wonderful things such as antiques, art and old electrical items you thought you’d never see again. One man’s junk is another man’s treasure.

Where do you recommend for a great meal?

There’s a very small beach called Playa Cabria (you’ll need a map to find it) on which you’ll find a lovely chiringuito (beach bar) called Tito Yayo, which serves delicious fresh food. It’s normally filled with locals on the weekends. My favourite dish is the king prawn salad with goats cheese and vinaigrette. A word of warning if you want to blend in with the locals: Only order paella for lunch, never dinner!

Where is the best place to get a sense of Almuñécar’s role in history?

The town is steeped in history. It dates back to 800 BC when the Phoenicians established a colony which later developed into a town called Sexi. The locals are still called Sexitanos. In 218 BC the Romans arrived and left some spectacular structures which are still intact today, such as five incredible aqueducts which amazingly four are still in use. There are also ruins of a Roman fish salting factory in the botanical gardens which is certainly worth a look.

What should visitors save room in their suitcases for?

If you’d like to share your little black book of places to visit where you live overseas, please email your answers to the five questions above to abroad@irishtimes.com, including a brief description of what you do there and a photograph of yourself. We would love to hear from you