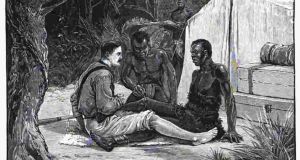 “What about Livingstone?”Agnetha and Anni-Frid harmonised on Abba’s 1974 album Waterloo. What about all those Victorian men who thought fame and renown lay in blazing tracks across Africa, their motives and conduct often questionable?

Thomas Heazle Parke was one of the last in that tradition of 19th century African exploration. Today, he stands outside Dublin’s “Dead Zoo” - the Natural History Museum - an exemplar of Victorian masculinity with a virile moustache, rifle and explorer’s garb. The statue was raised by public subscription in 1896, three years after his premature death; his sudden demise after seven years of ill-health were the costs of his African adventure.

Born in Roscommon in 1857, Parke was educated at the Royal College of Surgeons in Ireland and interned at various Dublin hospitals before a brief period as dispensary medical officer in Ballybay, Co Monaghan.

His 1881 move to Britain was well-timed. In the 1880s, the continent of Africa was carved up by European powers competing to extend their imperial territories. Parke found himself gazetted as surgeon to the British army in Egypt, at first working in the challenging circumstances of a cholera epidemic that killed 60,000 people.

He ended up on the frontline of the bloody conflicts and long, taxing inland expeditions of the period. He participated in several military engagements, but found fame with the Emin Pasha Relief Expedition of 1886-9. This was among the last major European expeditions to African interior, and made Parke the first Irishman known to have crossed the continent.

The expedition’s aim, ostensibly, was to rescue Emin Pasha, the besieged governor of Equatoria (now part of South Sudan). Previously known as Eduard Schnitzer, the Silesian-born doctor and convert to Islam had been left isolated by the Mahdist war.

Departing from Zanzibar under the command of American explorer and journalist Henry Morton Stanley, the party rounded the African coast via the Cape of Good Hope to reach the mouth of the Congo river. They proceeded by steamer to Matadi, where they began a 200-mile (320km) march to Pool Malebo at Brazzaville, proceeding through the vast rainforest to Equatoria.

The long expedition was headed by ten white men, supported by uncounted Zanzibari porters who carried heavy loads of supplies and munitions on subsistence rations, slowed by heavy rains.

The bedraggled expeditionaries must have been abashed when, as described by the late medical historian Jack Lyons, they eventually reached Equatoria to find an unperturbed Emin Pasha who was only reluctantly “rescued” and brought overland to Zanzibar.

The most shocking human casualty of the expedition implicated the naturalist, James Sligo Jameson, born in Scotland to Irish parents. According to sensational reports in the British press - the flames of which were fanned by Stanley - Jameson paid to watch a 10-year-old Congolese slave girl being cannibalized. He did not survive the expedition and, in an attempt to clear his name, his widow published his diary, where the incident is portrayed the result of a misunderstanding. The least that can be said of the matter is that he did not attempt to intervene on the child’s behalf.

Parke returned from Africa a celebrity, accepting such honours as a gold medal from the Royal Geographical Society, and an honorary fellowship from the RCSI. He resumed hospital work and was promoted to surgeon-major in February 1893; six months later, he was found dead on a friend’s yacht, presumably from a seizure.

The expedition made Parke’s reputation as a medic, not least because he twice saved Stanley’s life by treating an acute abdominal problem. His reputation was sealed with his 1893 book, Guide to Health in Africa.

However, as discovered by Irish medical historian Jack Lyons, all of Parke’s post-1890 medical publications were actually authored by his old friend and tutor John Knott. It appears that the pair conceived of the publications as a profitable scheme, combining Parke’s celebrity name and Knott’s medical knowledge. Despite outward appearances, Parke’s success as a tropical medic was built on as shaky a foundation as the Emin Pasha expedition.

This Extraordinary Emigrants article was written by Dr Angela Byrne, Department of Foreign Affairs and Trade historian-in-residence at EPIC The Irish Emigration Museum (epicchq.com) in Dublin’s Docklands, an interactive museum that tells the story of how the Irish shaped and influenced the world.