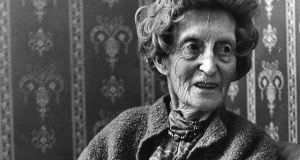 Mary Swanzy got to know the work of Picasso from viewing his paintings at soirees organised by Gertrude Stein in Paris.

These are the words of Irish artist Mary Swanzy, one of Ireland’s leading modernist painters. She achieved success in her lifetime, only to be relatively forgotten in death. A current retrospective at IMMA, paired with the above quotation from interviews replayed recently on John Bowman’s RTÉ One programme, have done something to reclaim her deserved reputation. Her self-professed dislike of fuss, a legacy of her Victorian upbringing, perhaps contributed to her being overlooked. But listening back to interviews with her what is clear is her passion for her work, and her incisive, philosophical approach to life.

Born in Dublin in 1882, Mary Swanzy was the daughter of Sir Henry Rosborough Swanzy and Mary Denham. Her father was president of the Royal College of Surgeons and the family grew up on Merrion Square. After attending school in Dublin, Versailles and Freiburg, she took classes at Mary Manning’s studio. She began to exhibit as a portraitist in 1905 with an exhibition in the RHA, and continued in this vein of work until 1910.

From 1905, Swanzy attended Delacluse’s studio for women artists in Paris and was exposed to the burgeoning artistic scene there. Her fervent passion for art and pragmatic approach are summed up in her later reflections on the process there:

“I had to go there where the teachers would know how to teach, which was by not teaching you at all…you did your work and you saw what they were doing around you and your fellow students criticized you and you criticized them…and once a week the master came round and told you how bad your work was…until you learned to do better.”

In Paris, Swanzy was exposed to new influences from the modernist school. She would later remember how normal it was to rub shoulders with emerging painters such as Picasso.

“The names that are known now were not known then… When I arrived as a student in Paris, Picasso was a young man trying to make his way…but he wasn’t known.”

She attended the soirées of Gertrude Stein, then an early champion of Picasso, where she and other artists could view Stein’s as yet unframed acquisitions: “Gertrude Stein used to have a kind of a soirée… and you could go to her house and see all the Picassos there. That’s how we got to know about him. He was a little man who painted.”

Swanzy’s travels didn’t end with her sojourn in Paris, and with political turmoil in Ireland around the first World War and the War of Independence, Swanzy divided her time between Dublin and Saint- Tropez, before travelling to a number of far-flung locations, including Honolulu and Samoa. Here, her work took on some of the fauvist influences of artists like Paul Gaugin.

By the mid-1920s, Swanzy had settled in Blackheath in London. During this time she exhibited regularly in Paris and in Dublin, alongside painters such as Paul Henry, Claire Marsh and Jack B. Yeats. Sarah Purser and Gertrude Stein were both admirers of her work.

Swanzy is singular in her era in having embraced a number of different artistic styles with great aplomb, working with fauvism, cubism, futurism and surrealism. During the Second World War, she stayed with a sister in Coolock, and became more involved in the Dublin art scene. In 1946, she exhibited in London with Marc Chagall, Henry Moore and William Scott. The last major retrospective of her work in Ireland was in 1968, in the Hugh Lane Gallery.

A close contemporary of other major figures in Irish history such as Dr Kathleen Lynn and Hanna Sheehy-Skeffington, it is worth considering if Swanzy’s rarified Dublin Protestant upbringing and her internationalist life contributed, along with her gender, to her exclusion from Irish history. Perhaps her story didn’t quite fit the Irish narrative propounded by figures such as Eamon de Valera, born the same year as her.

But Swanzy is an artist who still has plenty to teach us about how we evaluate history and its major figures. In her latter years, she contributed the following thoughts on life and death to an RTÉ interview:

“I imagine there’s a great ring of time into which we step for a short time, and then we step out again. What we bring into it and what we bring out of it is ours to be ashamed about, or modest about.”

This Extraordinary Emigrants article was written by Jessica Traynor, deputy museum director of EPIC The Irish Emigration Museum (epicchq.com) in Dublin’s Docklands, an interactive museum that tells the story of how the Irish shaped and influenced the world. Learn about more pioneering Irishwomen at the free exhibition, ‘Blazing a Trail: Lives and Legacies of Irish Diaspora Women’ at EPIC, January 4th-18th.