Life in Rio: It will take decades to fix this city’s many problems 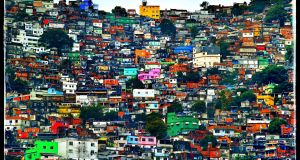 In the play The Great Post-Recession Work of Art, the inhabitants of a world where production has ceased hunt rats, fetishize a tin of peas, and finally resort to cannibalism. A recent theatrical adaption of Camus’s The Plague redirected the French writer’s allegory to refer to this year’s federal military intervention in Rio de Janeiro. The Netflix series 3% magnifies the already extreme social and economic divisions in Brazil into a dystopian vision of a world where only 3 per cent of participants will ever succeed in a gruelling test to get out of the favela-like Inland.

Dystopias are nothing new, and despite these examples, I don’t know if they are more prevalent in Brazil - particularly Rio - than anywhere else. Since Brexit and Donald Trump’s election, the popularity of dystopian fiction has skyrocketed. But, unlike in many more developed areas of the world, the sense of dystopian gloom is a concrete phenomenon in Rio, not just largely an expression of political fears, however valid these may be.

I arrived in Brazil two years ago when the country was in the process of hosting the Olympic Games and sealing the impeachment process on President Dilma Rouseff. In September of 2016, when I moved to Rio, the city was just past the huge and mostly farcical success of the Olympics. Rio had put on a good show and, most importantly, gotten everything ready in time for the competition. I arrived excited, but also wary, as many other Brazilians do not see Rio as the Marvellous City, but rather as, basically, a kip: too hot, too violent, too dirty, and far, far too many favelas. By then the city was already having problems, such as difficulty in paying public workers, the presence of Zika, and a significant increase in crime. As the end of the year approached things only got worse; and worse again all throughout 2017, and again in 2018.

In no particular order (and by no means exhaustively): Olympic venues were abandoned; police left or were driven out of many favelas; public services were cut back and planned projects abandoned; the country’s biggest Yellow Fever outbreak in decades reached the city; corruption scandal after corruption scandal broke; a city councillor was assassinated; soldiers were sent to the city to tackle crime; and then a full scale (and highly questionable) federal military intervention was launched in February 2018.

One evening I looked out my window to see the sky filled with smoke: ten or so buses had been burned by anti-pension reform protestors. When I went down to have a look, homeless men were already working to prise apart the engines to sell for scrap metal, wincing whenever they burnt themselves on the still piping-hot, incinerated metal frames. Less desperate passers-by took selfies. Others, such as myself, just watched.

Another day I arrived at class in a government agency designed to combat corruption, and my students told me that the director of the agency had been arrested for corruption. They said they were not surprised.

But I was, as I had been by the buses, or when doctors in a public hospital told me they were short on bandages and antiseptics. But I have learned with time not to be. Rio may be relatively chaotic - though hopefully only temporarily - but life must and does continue as normal. On a day-to-day level, little has changed in Rio since I arrived. It’s possible to visit the city and barely be perturbed by these problems. For the record, I love living here, and so do countless others, gringos and locals alike.

Life continues as normal because Rio is not really a dystopia. Dystopias exist in fiction, where they have the capacity to excite and engross us. And though Rio’s crises are not devoid of drama, it’s mostly in the ordinary, boring day-to-day that one sees what is becoming of the city. It is not the tanks in the streets of Rocinha, but the countless armed confrontations that terrorise and sometimes kill residents in more distant and lesser-known favelas. It’s a student of mine who owned his own house in a not very well-off suburb of Rio, but had to leave and rent elsewhere because he and his family, after so many armed robberies, were too frightened to leave their home with anything even close to what we would consider a degree of normality. Or a friend of mine telling me a small bit of good news, namely that robberies were down in his neighbourhood after the dealers started executing the culprits. Or waiting lists for serious medical treatments ballooning due to lack of funds and other problems: medical equipment stolen, others perpetually “awaiting repair” (code for employees putting their foot down over non-payment of salaries).

Events that make national and international headlines, such as the burning down of the National Museum, are rare; farces, such as the hydrants having no water when the firemen arrived, are daily.

And, perhaps most importantly, Rio is not a dystopia because dystopias take place in the future, whether high-tech or one of civilizational collapse, and the corruption, violent crime and massive socio-economic disparity of Rio nowadays is a product not of the future, but a remnant of the city’s messy and brutal history. Rio is not - as many of its residents believed five or ten years ago - heading into the future, instead it’s sliding back into the past.

But the city is holding together, as it has always done. Most of the time, things don’t fall apart, they just stagnate or decay. No one is particularly optimistic in Rio at the moment, even those who in October were celebrating the victory of Bolsonaro in the presidential elections. It will take decades to resolve Rio’s deeply rooted problems, and that work needs to start right now.

Like most, I’m not optimistic, but my fingers are crossed.

Dermot O'Sullivan is an English teacher and writer living in Rio de Janeiro.  He recently had his first full-length play produced in Brazil.