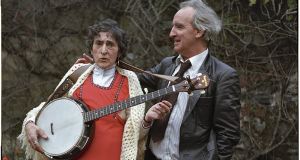 In the 1930s, a 16-year-old took to the roads of Ireland to make her living as a street singer. Her striking appearance and waist-length black hair combined with her raw, unaffected and uncompromising singing style to create a compelling presence and an icon of Irish folk music.

Margaret Barry is said to have been “discovered” singing on a Dundalk street corner in 1951 by Robin Roberts, research assistant to American folk music collector Alan Lomax. That night, she made her first recordings in Lomax’s hotel, including popular songs that she had learned from Radio Luxembourg.

The breadth of Barry’s repertoire reflected both her family’s musical pedigree and the imperatives of life on the road. Raised in a Cork tenement by a family with Irish Traveller heritage, Barry grew up immersed in the Irish folk tradition. Her grandfather, Bob Thompson, was a renowned uilleann piper who took first place at the Feiseanna Ceoil in Dublin and Belfast in 1897 and 1898. Other family members were, in the words of David Tuohy and Mícheál Ó hAodha who have written about Irish Traveller music traditions, “accomplished Traveller musicians and … street balladeers”.

She was therefore a custodian of traditional song who had learned by immersion rather than formal study, and for this reason was sought out by collectors like Lomax. Because she was a Traveller, she also had a wide repertoire of songs from all over Ireland, whereas most traditional musicians would only know pieces from their own region.

The precarity of living as a street performer made Barry open to learning new material in response to what her audiences wanted to hear. The shop-girls of Dundalk would wait for Barry to come into town, and hand her requests for the most popular songs of the day. She gave those songs her own distinctive flavour, and improvised lyrics when memory failed her.

Barry moved to London in the early 1950s and became immersed in Camden Town’s thriving Irish music scene. As reported in The Irish Times on October 31st, 1959, parts of London then resembled Irish towns, where low-paid workers bought their “Sunday best” by instalment and found joyful antidote to workaday life in weekend dancehalls, and “Cockney ears (were) assailed by Irish songs and ceilidhe music”.

Barry quickly joined forces with Sligo fiddler Michael Gorman and, together with Willie Clancy, they recorded two albums, Songs of an Irish Tinker Lady and Irish Jigs, Reels and Hornpipes. These recordings were made in the London home of the writer and folk-singer Ewan MacColl, who saw folk music as a tool of working-class political expression.

For Barry, however, music was more than politics - it was a way of life, and a means of living. Speaking in the 2005 documentary Songbirds, singer-songwriter Tommy Sands said Barry “carried (the banjo) around much as a walking stick or an old friend”.

After about ten years in London, Barry moved with her daughter to a round-top caravan in Laurencetown, Co Down. Billed as ‘The Singing Gypsy Lady’, she performed at venues ranging from Dublin’s Brazen Head, to the 1965 Newport Festival, where, The Times reported, she shared a billing with Joan Baez, Bob Dylan, and Peter Paul and Mary.

Barry deservingly retains an enduring reputation in folk music circles. Christy Moore, for one, has cited her influence on his own style. More broadly, she embodies the rich contribution of Travellers to cultural life in Ireland and in the Irish diaspora - not least for the breadth of her repertoire and her ability to improvise.

She died at home, in the care of her family, in December 1989. In a television interview in her later years, Barry said of growing older, “I don’t mind one bit - if I can sing an old song, I’ll be still at it anyway, and on the move”.

This Extraordinary Emigrants article was written by Dr Angela Byrne, DFAT Historian-in-Residence at EPIC The Irish Emigration Museum (epicchq.com) in Dublin’s Docklands, an interactive museum that tells the story of how the Irish shaped and influenced the world.

As part of Tradfest 2019, join singer Oonagh McArdle for a workshop exploring the art of sean-nós at EPIC on January 26th.