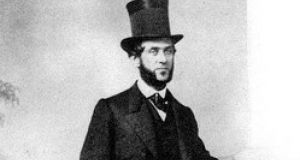 888 Brannan Street in San Francisco is home to Airbnb’s global headquarters. It is fitting that a company dedicated to accommodating out-of-towners who have come seeking adventure should be found on a street named after a man who made his fortune providing prospective gold miners with everything they needed to make their own dreams a reality.

Few members of the Irish diaspora have led as memorable a life as Samuel Brannan. Born in 1819 in Maine to an Irish immigrant father and an American mother, he was the sixth and youngest son. His father Thomas was an alcoholic and his mother was often ill, so Samuel was effectively brought up by his older sister, Mary Ann. In 1833 she married Alexander Badlam and moved to Ohio, taking her 14-year-old brother with her.

Once in Ohio, the trio were attracted to the newly founded Church of the Latter Day Saints, or Mormons, and the adolescent Brannan became a zealous devotee of the new faith, helped to build their temple at Kirtland and carried out missionary work across the state.

By 1844 he had turned to journalism to help spread the Mormon message as assistant editor of ‘The Prophet’ (later the New York Messenger), a semi-official Mormon newspaper based in New York. While living there he married Ann Eliza Corwin, and became the paper’s editor after the death of the founder of the Mormon Church, Joseph Smith.

Brannan and his new wife would soon leave New York when he was tasked with outfitting and leading an expedition of 238 devotees to the western seaboard. They travelled by sea aboard the Brooklyn, and arrived in the tiny Mexican village of Yerba Buena in Alta California in July, 1846, after seven months at sea. The settlement had just been seized by the US Navy three weeks earlier and would be renamed San Francisco the following January.

The newly arrived shipload of Mormon migrants more than doubled the population of the small port, and they would have a profound impact on its early character. Brannan founded the village’s first newspaper, the California Star, soon after arriving and reputedly conducted the first non-Catholic Christian religious service in the region. He founded a small farming settlement called New Hope on the banks of the Stanislaus river where he hoped the main Mormon community might settle, but they instead opted for the shores of the Great Salt Lake in Utah, much to Brannan’s disappointment.

He began to gradually drift away from the church and instead put all of his energy into his business ventures. He would soon play an important role in starting the California Gold Rush. Having received advanced word of the discovery of gold near Sutter’s Mill in January, 1848, Brannan bought up all of the equipment and provisions available in Northern California that a prospector might need and stocked up his newly opened general store a few miles from the find. In March, he then reportedly walked through the streets of San Francisco brandishing a vial of gold flakes shouting ‘Gold! Gold! Gold from the American River!’ thereby announcing the find to the world.

Within a few months, word had spread to the east coast and thousands of optimistic migrants hoping to find their fortunes began arriving in the region, with most stopping at Brannan’s store on their way to the goldfields. At the height of the gold rush he was earning $150,000 a month, and began to invest in shipping, hotels and real estate.

Not content with his rapidly expanding fortunes, he gathered a group of 24 mercenaries and sailed for Hawaii, where he apparently intended to overthrow the king and proclaim himself governor-general of the small pacific island kingdom. His 1851 expedition was a disaster, and amounted to little more than a bar room brawl in the French hotel in Honolulu after the party publically posted a placard listing the new government roles each of them would hold after the revolution. They sailed back to San Francisco where they were met with derision by the locals. Some residents were heard to yell to Brannan as he arrived ashore “Well, have you taken the Islands? Who’s the King? Is it you?”

Failed revolutions aside, by 1860 he was lauded as “the first millionaire west of the Mississippi” and was undisputedly one of the richest men on the western seaboard. He has served as a California State Senator, sat on the San Francisco town council, founded a brewery and spa resort town at Calistoga in the Napa Valley with an allegedly “overzealous cannibal” as his business partner and begun speculating on land grants in Mexico. In 1865 he would also personally outfit and fund the American Legion of Honor, a mercenary unit that would help overthrow Emperor Maximilian I of Mexico in 1867.

However, a costly divorce, failed land speculations in the US and Mexico and some serious health problems would see Brannan’s fortune slowly eroded; so much so that by the time of his death in 1889 he didn’t even have enough left to pay his funeral costs and his remains weren’t buried until his nephew paid the outstanding costs 16 months later.

This memorable Irish-American certainly left his mark on the world and today his grave can be found in Mount Hope Cemetery in San Diego, where his headstone rather immodestly reads “California Pioneer of ‘46 - Dreamer - Leader - And Empire-Builder”.