At a time when women mountaineers were almost unheard of, the Irish climber broke societal rules 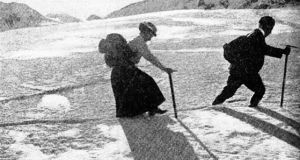 The towering peaks of the high Arctic weren’t where you’d usually expect to find the genteel ladies of Victorian society. However, Wicklow woman Elizabeth Hawkins-Whitshed never led a conventional life. As the only child of an Irish baronet, Elizabeth had a privileged upbringing. Her father died in 1871 when she was 11-years-old. She then inherited Killincarrick House near Greystones and nearly 809 hectares (2,000 acres) of land in counties Wicklow, Dublin and Meath.

She described her childhood as a happy one, and would often feign headaches in order to abandon her studies and play in the garden. Like most aspiring ladies of the landed classes, she moved to London and made her society debut at 17. Within a year she married Capt Fred Burnaby, a celebrity adventurer and soldier, then considered one of the most eligible bachelors in Britain. Among a number of other daring exploits, he was the first man to cross the English Channel by hot air balloon and wrote a number of bestselling books about his exploits.

Following their marriage in 1879, Elizabeth gave birth to their only son, Harry, but the couple had already begun to live separate lives. Elizabeth began to suffer from respiratory issues and it was recommended she leave London for more favourable climates. After a brief stint in Algiers she made her way to the Alps, settling in the French town of Chamonix in the shadow of Mont Blanc, which stands at 4,810m. The alpine air appeared to have worked wonders for her and by the end of her first summer there she had made not one but two ascents of the highest mountain in the Alps, despite never having climbed before. She developed quite a passion for the sport and, in an era when women were discouraged from taking part in “male activities”, she would make more than 100 ascents.

As she herself wrote in the early 1930’s: “The chief reason why women so seldom climbed 50 years ago was that unless they had the companionship of a father, brother, or sister, it was looked at as most shocking for a ‘female’ to sleep at a hut or a bivouac (a temporary camp without cover).”

To avoid causing a scandal, in her early hiking days she would often wear a long skirt for the initial part of her ascents before changing into breeches once she was out of sight. Not content merely to be one of the first Irish women to climb the Alps, she also became a pioneer of mountain photography. The photographic equipment of the late Victorian era was heavy and unwieldy, and setting it up in sub-zero temperatures on top of a mountain peak while being buffeted by strong winds, was no easy feat.

She would capture thousands of images of spectacular views that had never before been photographed up close. Much like her husband, Elizabeth soon began to write about her adventures and, from 1883 onwards, began to publish them using her own photographs as illustrations. Her first book “The high Alps in Winter” was only the start of a series of works chronicling her mountaineering experiences.

Elizabeth was widowed in 1885 when her estranged husband was killed during a British army campaign in the Sudan. By this time she was a resident of the Swiss town of St Moritz, then a burgeoning centre for winter sports and a popular tourist destination for the European upper classes. She remarried the following year and her second husband was the famed English mathematician Dr John Frederic Main, who had moved to Switzerland some years before to improve his own health. Unfortunately, he too died prematurely at the age of 37 in 1892.

During the following decade Mrs Main, as she was then known, would spend six summers climbing in Norway and Lapland, becoming one of the first mountaineers ever to climb there. She recorded 33 climbs here. She also reported to have undertaken several of these ascents without a local guide – an unheard of practice that places her among the very earliest to attempt to do so.

She enjoyed another first when she turned her hand to filmmaking. She captured footage of Swiss residents engaging in bobsleigh racing, tobogganing and figure skating making her the world’s first mountain filmmaker and one of the first women to do so.

By the turn of the century she had more or less retired from climbing, and remarried for a third and final time. Her new husband was Mr Aubrey Le Blond. The couple remained together until Elizabeth’s death in 1934. In 1907, she helped found the Ladies’ Alpine Club and was elected its first president in recognition of her work in popularising the sport. She would spend her later life travelling extensively with her husband and writing. When the first World War broke out she volunteered as at a military hospital in France and worked with the British Ambulance Committee.

Le Blond’s legacy is impressive. A pioneering mountaineer, photographer, filmmaker and a successful author – she defied societal expectations to lead a life of adventure. She would spend nearly her entire adult life living abroad and her photographic records from her travels are among the earliest surviving examples of mountain photography found anywhere in the world. Her writings are still enjoyed today and capture the serenity that all too often eludes us:

“Slowly the last rose-colour fades from the peaks, and the stars brighten, and you hold your breath to hear the most wonderful thing you have ever heard-utter stillness, that yet is strained almost to bursting point with the energies that make it, the peace that passes understanding that lies above the snow and beneath the stars ...”