‘Would you not come home?’ An Irishwoman in Cambodia during the Covid-19 crisis 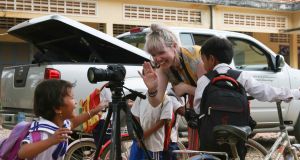 It’s a running joke in Cambodia that all foreigners either work as English teachers or for nonprofits. Typically, it’s true. I’ve been working in the charity sector in Cambodia for past two years and now consider the country’s capital of Phnom Penh my home – albeit a far cry from my hometown in rural Co Wexford. When the coronavirus pandemic hit, I felt pulled in two directions between the desire to stay in Cambodia and commit to my cause as an aid worker, and the desire to follow many of the other expats and return to the perceived safety of my home country.

In mid-March, the Cambodian government ordered a nationwide school closures in line with what many other countries in Southeast Asia were doing. Almost overnight, I saw huge numbers of the expat teachers pack up and leave town. Nonprofit workers on mission were ordered to return to their home countries immediately too. My Facebook feed was blowing up with everyone selling their stuff and freshly vacated apartments available to rent. Within two weeks, many friends and familiar faces were gone.

In early April, the Cambodian government drafted a newly proposed law in the case of declaring a national emergency. The draft legislation quickly came under scrutiny from human rights groups, claiming it could result in the curtailment of civil rights and liberties, such as freedom of movement, expression, association and assembly. In a country that already ranks second last out of 113 countries for rule of law adherence, and 162nd out of 180 countries for corruption, this criticism is no big surprise. Whether a state of emergency will be declared in the future remains to be seen, but many embassies have warned their citizens left living in Cambodia to prepare to hunker down for a while as flights out become less available.

At the time of writing, the amount of confirmed coronavirus cases in Cambodia have reached 122 – a number that some health experts doubt due to cases reportedly being vastly under reported in southeast Asia. Cambodia has a population of about 15.2 million and the population of Phnom Penh is 2.1 million.

“Would you not come home?” was the recurring question from my friends in Ireland over the last few weeks as Ireland went into lockdown. I thought about it, carefully weighing up my knowledge of Cambodia’s limited healthcare system (which relies heavily on donor funding) and restricted freedoms against my reasons for being here. My decision to stay came down to my career. In its different shapes and forms, my career has always revolved around storytelling. Now, more than ever, I thought that stories of how this pandemic will affect southeast Asian countries would need to be told.

Irish abroad: Will you stay or go?

Before the pandemic, my job for international nonprofit Aide et Action involved travel across Cambodia, Lao People’s Democratic Republic (Laos) and Vietnam meeting beneficiaries of our projects. But, when the crisis came, our projects came to an abrupt halt. In line with nationwide school closures, our projects that largely all revolve around increasing access to education for marginalised children, couldn’t be implemented and our staff could no longer travel to project areas. Sadly, my short-lived enjoyment of playing GAA and Aussie Rules football here has also come to a halt.

Like many of my friends in Ireland, I began to work from home, to social distance and to self-isolate in early March. While wet markets and most retail stores still remain open, I stopped going and started ordering my groceries online. Even though there are no curfews currently in place, I only venture out when I have to. The biggest change I’ve seen in the city over the last two months is the growing absence of foreigners.

This week, in a bid to further curtail gatherings and movement, the government announced the Cambodian New Year to be postponed and holidays granted after the pandemic. Typically, the New Year, which April 13th - 16th this year, is one of the biggest holidays of the year with many locals taking up to two weeks from work to visit family in other provinces, to bring food as offerings to the temples and to celebrate with karaoke and dancing on the streets. This year, the streets are deserted.

I count my ability to self-isolate as a privilege. My work had taken me to some of the most economically deprived areas of Phnom Penh and I wonder how those I’ve met, such as a family of 11 people sharing a single room without access to safe water or adequate food, might protect themselves against the virus. With a nationwide closure of museums, cinemas, concert halls, bars, and karaoke establishments, I also began to wonder how Cambodia’s restrictions would impact those who made a living from tourism.

The moment our projects at work were suspended, my colleagues began to assess the impact of the crisis and to develop new projects to provide those most vulnerable with emergency assistance. We converted tuk-tuks we had previously used as mobile libraries into information stations delivering audio messages on how to hand-wash and social distance. We installed water containers with pipes, taps and soap in areas that had no sanitation facilities, and each week since the crisis we’ve been developing new responses accordingly such as emergency food distribution and free education apps so children can learn online.

But I already fear that the pandemic’s interruptions to education will have long term implications – especially for the most vulnerable, such as those living in Phnom Penh’s poor urban settlements. The majority of the Cambodian population is economically vulnerable and according to the World Bank, any negative shock reducing consumption per capita by US$0.50 is estimated to double the poverty rate.

The shock of Covid-19 has seen children return to working on the streets, selling fruit and sticks, or whatever they can get their hands on as well as scavenging plastic and aluminium to sell to recycling companies. The current temporary school closures might mean a permanent end to education for some and a greater chance of these children spending their life in poverty, leading to fewer opportunities for their families and communities.

While no country is going to emerge from this pandemic unscathed, some will be harder hit than others, not just in terms of the death toll but also in socio and economic terms. Staying and committing to my job here feels more important to me than ever. As we keep telling ourselves, we’re in this together and for me, it’s not the time to leave. I believe when this is all over, teachers and aid workers in Cambodia will be in short supply.