The Belfast man who became president of Israel 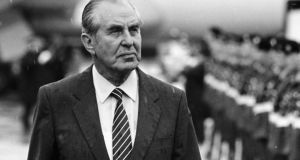 Former Israeli president Chaim Herzog, who was born in Belfast and brought up in Dublin, pictured inspecting a guard of honour at Dublin Airport in 1985. Photograph: Pat Langan/The Irish Times

Irishman Chaim Herzog rose through the military to become a United Nations ambassador and president of Israel. He was a man of contradictions, once tearing up a UN resolution on Zionism, and yet capable of significant diplomacy. Whatever one’s views on Israeli militarism, there was no denying his commitment to his cause.

Herzog was born in Belfast in 1918. The family moved to Dublin when his father became chief rabbi of Ireland. Isaac Herzog was an ardent Zionist and Irish nationalist. Chaim was bar mitzvahed in Adelaide Road synagogue, and received his secular education at Wesley College. Proficient in cricket, rugby and boxing, he was Irish youth bantamweight champion.

Sent by his parents in 1935 to attend a Talmudic academy in Jerusalem, he joined the Haganah, the underground Jewish paramilitary force. He studied law at London University and was called to the bar in November 1942. Enlisting in the British army, after lengthy training he was posted in 1944 to Normandy as an intelligence officer.

After the German surrender, he was assigned to identify and interrogate top Nazi officials. He returned to Palestine and headed a Haganah department that spied on the United Nations. He was designated by prime minister David Ben-Gurion to modernise intelligence services, and served as military attaché at the Israeli embassy in Washington.

In a second stint as director of military intelligence from 1959 to 1962, he introduced computerisation, and enhanced cooperation with France. He also established covert collaboration with the Iranian secret service, and drafted a joint declaration on Israeli-Iranian relations, a major diplomatic breakthrough.

For 10 years from 1962 Herzog was managing director of GUS-Rassco, a joint British-Israeli industrial development venture, and appeared frequently as a military commentator on Israeli radio and the BBC. His profile within Israel was enhanced by broadcasts during the 1967 Arab-Israeli war.

As military governor of the occupied west bank (1967-8), he ordered the bulldozing of an Arab quarter of east Jerusalem to allow greater space for Jewish worshippers at the Wailing Wall. In 1972 he became senior partner in a law firm, and during the 1973 Yom Kippur war again offered commentary on both radio and television.

As ambassador to the UN (1975-8), he opposed the 1975 resolution describing Zionism as a form of racism, famously tearing up a draft copy on the floor of the general assembly. In the wake of Israel’s 1978 incursion into south Lebanon he agreed to the establishment of UNIFIL, a peacekeeping contingent in which Irish troops would participate.

He directed the Labour Party’s public relations office in the 1981 general election, and won election to a Knesset seat. As Labour’s 1983 presidential candidate he attracted cross-party support, and was elected as the sixth president of Israel. After the deadlocked 1984 general election he played a major role in the formation of the “national unity” government.

Amid stern international condemnation after the 1982 Israeli invasion of Lebanon, he warned against extremism on all sides and ostracised certain figures of the Jewish ultra-right, yet alienated liberal opinion by pardoning intelligence agents allegedly involved in the deaths of Palestinian prisoners, and by commuting the murder sentences of a Jewish vigilante group.

On a 1985 state visit to Ireland he inaugurated the Irish Jewish Museum on Walworth Road in Dublin, and in 1987 became the first Israeli head of state to visit Germany. He was re-elected unopposed to a second five-year term in 1988.

Herzog wrote several books, largely on Jewish and Israeli military history. His memoirs were published in 1996. Acknowledgement of his Irish origins permeated his political career; recordings of Irish tenor John McCormack would signal his arrival at functions throughout Israel.

In 1947 he married Aura Ambache. They had one daughter and three sons, including politician Isaac Jnr. He died in Tel Aviv in 1997.

Based on Lawrence William White’s biography of Chaim Herzog (edited for this Extraordinary Emigrants series for Irish Times Abroad by Clare McCarthy) in the Royal Irish Academy’s Dictionary of Irish Biography.

Ross O’Carroll-Kelly: ‘We’re having a fancy dress porty. I’m going as the wife of a philanderer’
5