‘There is still a massive amount of opportunity in Australia’ 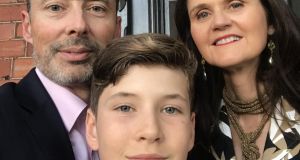 Carl Walsh with his wife Brenda and son Matthew in Melbourne

July 19th, 1992 was an auspicious day for Carl Walsh. He was a goalkeeper in the squad when his county, Clare, beat Kerry in the Munster football final. The previous time they’d won it was 1917. The Bannermen have not won it since. If Walsh had not done much else of note in his life, he could still dine out on his football glory, but he has done much of note and continues to do so.

Even on a phone line from one Australian city to another, Walsh’s enthusiasm for everything he does is palpable, whether he is talking about business, his family, the GAA or running marathons.

Raised in Miltown Malbay in west Clare (“the home of great music and great Gaelic footballers”, as he puts it), Walsh studied law in UCC. After graduating in 1988 he got a job in Limerick with what is now called Deloitte’s, “primarily because I was playing football and wanted to be close to home”.

The itch to see more of the world took him to Moscow for two years in the mid-1990s.

“It was interesting. It was like the wild west. Things weren’t great in Ireland at that time, but when things picked up and began to fire, I went back home in 1997.”

While working for General Electric in Dublin he also played football and coached at Clanna Gael. When he and his wife Brenda got married in 2001, they decided to travel again.

“I transferred to Melbourne with GE and we’re still here 17 years later.”

Walsh’s GE career in Australia took him from chief financial officer at its automotive financial services division, to financial controller at GE Money, to managing director of SME lending at GE Capital.

After working with three other companies, including four years as general manager of group planning and analytics at ANZ, one of Australia’s biggest banks, Walsh struck out on his own last August, setting up Burren Advisory.

He says that setting up his own company at the age of 51 was not easy. “It’s something that takes a bit of courage, but I now love working for myself, with different clients. I love the variety, the accountability, the flexibility and freedom of it. In corporate life there can be constraints on thoughts, actions and even opinion.”

A trip to Ireland in June finally made him take the plunge to leave the corporate world.

“It was brewing for a while, but I was talking to our son Matthew, who is 13, one day and said he should work for himself when he gets older. And he said ‘Dad, why don’t you work for yourself?’ It was a turning point. Out of the mouths of babes.

“Over the years I’ve built up a big network and I leveraged that and that’s where I got the work from.”

Walsh has been on the board of the Irish Australian Chamber of Commerce since 2016.

“Because of the chamber, and my own experience, I have a good sense of what business is like both in Ireland and Australia. People like to talk about the differences, but essentially business is carried out in a similar fashion in the two countries. People are generally respectful and collaborative. Ireland probably has the edge in innovation, because there are not many resources, so people are quite inventive to gets things off the ground.”

Walsh has not just brought his business skills to Australia, he is also passing on his sporting skills.

“In Victoria kids’ GAA is only two years old, but we already have around 300 playing Gaelic football and hurling and it’s growing exponentially. It’s very exciting. Most of them are Australian-born.

Everything I’ve learnt in sport has been useful in my life. You learn about resilience and teamwork

“A lot of them have Irish-born parents, but we have one girl whose parents are Indian and she’s playing hurling. It’s an example of what can happen, how attractive our sports are to every child if delivered the right way and coached the right way. Kids playing hurling can feel like a bit of a warrior when they have the helmet on and the stick in their hands.”

As well as coaching others, Walsh runs marathons, raising money for the Irish charity Soar, which helps young people to reach their potential. Former Clare hurler Tony Griffin is Soar’s chief executive and co-founded it with Karl Swan after being influenced by another Irish man in Melbourne, the late Australian rules footballer Jim Stynes and his work with the Reach Foundation.

Not surprisingly, Walsh says “everything I’ve learnt in sport has been useful in my life. You learn about resilience and teamwork and that often what you’re doing is a marathon, you have to take a long-term view of things. You learn how to deal with conflict and how not to get ahead of yourself when things are going well and don’t get too low when things are going badly.”

He says even with Ireland’s economy going well again, Australia is still worth considering for young Irish people. “There is still a massive amount of opportunity here. If you have an idea and you have the drive, you can be successful here.”