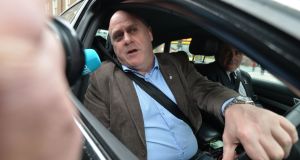 Independent TD Noel Grealish raised the issue of personal remittances sent from Ireland to other countries in the Dáil this week. Photograph: Alan Betson/The Irish Times

“Disappointment” and “shock” were some of the responses from Irish emigrant support groups to Independent TD Noel Grealish’s comments regarding immigrants in Ireland sending back money to their home countries.

The Galway West TD has been accused of “disgraceful racism,” of using “dogwhistle tactics” and of seeking notoriety after he suggested some money sent home by Nigerian immigrants in Ireland may have derived from crime or fraud.

Mr Grealish used the Leaders’ Questions slot in the Dáil this week to raise the issue of personal remittances sent from Ireland to other countries. He focused on Nigeria, which in the past eight years has received a total of €3.54 billion – the largest sum. He said his figures were taken from a World Bank report.

However, CSO data shows remittances of around €17 million a year for the period 2010-2017 (or €136 million). Taoiseach Leo Varadkar said for decades, even centuries, Irish people had gone abroad and sent money home.

Karen McHugh, chief executive of Safe Home Ireland, which is an emigrant support service supported by the Department of Foreign Affairs, said remittances from Irish emigrants became a routine part of emigration over the last century and continues to this day.

“We are shocked, disappointed and condemn the comments made by Deputy Noel Grealish in the Dáil, especially that they were based on estimates and not facts,” she said.

“The money sent back to Ireland ensured the survival of families and often provided funds for other family members to emigrate themselves to ensure they could continue this support. Great personal sacrifices were made and in our work in Safe Home today we see this first hand. Rural Ireland was and still is hard hit by emigration, and would not have survived without the remittances from its own citizens. As an emigrant nation we should be more sensitive to this topic.”

Have you sent home money from abroad?

Fr Alan Hilliard, a board member of the Irish Episcopal Council for Emigrants, said Mr Grealish’s comments lacked understanding for what it is like for people when they leave their home.

“When people leave they are always thinking of someone at home. They love them, they belong to them and they want to look after them so they send money back,” he said.

“When I studied economics in the early 80s on the budget estimates, there was always a category for emigrants remittances accounted for in the national budget. That’s how important it was,” he said.

Dr Piaras Mac Éinrí, an expert in migration at University College Cork (UCC), said Irish emigrants have sent money back throughout history as have emigrants from other countries.

“Remittances are therefore completely normal in the context of international migration and the maintenance by migrants of strong links with their families and countries of origin,” he said.

“There is no evidence to suggest there is anything unusual in remittances sent by Nigerians to their home country. Moreover, the manner in which Deputy Grealish posed his question, when combined with his remarks recently in Oughterard, suggest that his real underlying intention was to smear an entire community of a particular ethnic and geographical origin.”

The World Bank estimates that Irish emigrants sent €610 million home in 2012, up from just under €450 million in 2009, and more than double the figure 10 years previously.

Irish people living in the UK sent about €5.7 billion back to their families in Ireland over 30 years, between 1940 and 1970. Many Irish families relied on the money to survive economically.

During the 19th century money sent from emigrant workers back to Ireland helped prevent starvation and eviction, and improve living standards for many families.