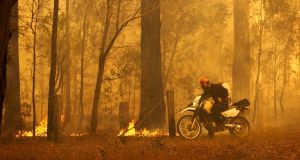 Here in Australia we are still three weeks shy of summer but our bushfire season has well and truly kicked off with a vengeance.

Fires that started in early October have escalated in recent days, and large tracts of northern New South Wales and southern Queensland are being laid waste by multiple fast-moving fires.

The scale and fury of these fires is almost unimaginable. More than 850,000 hectares have been burnt in NSW. At one stage, these combined fire fronts totalled an astonishing 1,000km. Beleaguered firefighters, mostly volunteers, were frequently overwhelmed and unable to respond to many emergency calls for assistance.

So far three people are confirmed dead and several more people are unaccounted for. More than 150 properties have been lost with this toll expected to rise significantly over the coming days. Thousands of people have been evacuated.

NSW state emergency services minister David Elliott said residents were facing what “could be the most dangerous bushfire week this nation has ever seen”.

Such is the ferocity of this week’s fires that they are creating their own weather patterns and generating pyrocumulus (fire) clouds akin to that of volcanic eruptions.

“Unprecedented”, “unchartered territory”, “apocalyptic”, and “beyond real” - are just some of the descriptions being used to attempt to convey the carnage and destruction being unleashed. The conditions generated by some of the fires have rendered it unsafe for water bombers to try and douse the flames. There are reports of hundreds of koalas, arguably Australia’s most iconic marsupial, perishing near Port Macquarie in NSW.

Irish in Australia: Do you live near the bushfires?

According to climate scientists, severe weather events are likely to be the new normal for Australia. The one degree (celsius) of warming we have already experienced has led to 50 per cent of the Great Barrier Reef dying.

Tropical cyclones are moving towards the southern edge of current cyclone zones to northern Australia where almost four million people live, mainly in coastal areas. Our wet lands and rainforests are ablaze and precious fragile ecosystems are being lost forever.

Most of Australia’s radio “shock jocks” and mainstream media continue to pour scorn on any assessment reports by the UN’s Intergovernmental Panel on Climate Change. One popular radio presenter derides climate change advocates as simply being climate alarmists. Greta Thunberg is frequently scorned by these commentators. For some Australians, environmental concerns still run a distant second to economic prosperity and job security.

And yet, despite this mounting evidence of climate catastrophe, the Australian prime minister Scott Morrison continues to steadfastly reject any link between carbon emissions and climate change.

The majority of his conservative cabinet remain trenchant climate-change sceptics. Homes Affairs minister Peter Dutton, whose chief responsibility is border security, has suggested that climate change protesters participating in demonstrations should be stripped of their welfare payments. Morrison recently expressed his desire to draft legislation that would ostensibly outlaw the advocating of boycotts of companies who refuse to bankroll proposed new coal mines. Social capital is not on Morrison’s radar.

Perhaps this dogged refusal by our political leaders to embrace any meaningful policies regarding renewal energy, and to acknowledge what is unfolding in our fragile environment may have something to do with the fact that Australian fossil fuel companies continue to make significant donations to our two main political parties, as they have for many years.

Even as these fires continue to burn, there is growing anger, much of it directed to our conservative right-leaning government, for their lacklustre even regressive response to the undeniable and scary phenomenon that is climate change. Morrison is also refusing to be drawn on whether he accepts there is a link between climate-change and these latest catastrophic fires.

But the prolonged drought in NSW with 90 per cent of that state now essentially unproductive and a tinder dry bush suggests this is no longer indisputable. Morrison has offered his “thoughts and prayers” and $1,000 in immediate financial help to those who have lost their homes.

Gladys Berejiklian’s state government oversaw a 30 per cent funding cut to the NSW Rural Fire Service. These cuts continue the trend of the past decade. Morrison and Berejiklian are keen to stick to the “now is not the time” mantra, as if borrowed from the NRA playbook.

It remains to be seen how long Australians will be prepared to tolerate this lack of leadership from our political leaders.

But the likelihood of further loss of life and properties has not yet diminished.

Thoughts and prayers may well prove wholly inadequate, again. One can only wonder what further catastrophes are in store, come summer.

‘My boss gives me information that is misleading . . . I am obviously being bullied’
Real news has value SUBSCRIBE