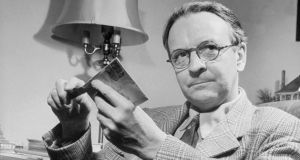 Raymond Chandler, the quintessential crime writer, master of the noir genre, is remembered as chronicler of the grimy underside of rapidly expanding metropolises like LA in the 1940s and 1950s. It might be difficult to imagine his famous creation Philip Marlowe wandering the streets of an Irish town.

However, despite being born in Chicago in 1888, Chandler’s early years were shaped by a family connection to Waterford city where he spent many summers in his youth. Chandler’s mother, Florence Thornton, was a Church of Ireland emigrant from Waterford who followed her sister Grace to Nebraska. She married the unreliable and alcoholic Maurice Chandler. Maurice absconded when his son was seven. Florence moved to London with her son, and a solicitor uncle from Waterford, Ernest Thornton, who sponsored Chandler’s education at Dulwich College. Thornton had bought a house in Upper Norwood for Florence, two of her sisters, her mother and Raymond in order to “get them out of his way in Waterford”. But summers were spent in Waterford in the large, austere house on Cathedral Square - now commemorated by a blue plaque.

Waterford writer Bill Long, speaking in an RTÉ radio documentary in 1991, recalled the extraordinary coincidence of his meeting with Chandler in his latter years in Chelsea, London, and their realisation of their shared Waterford roots. Chandler shared many of his recollections with Long, painting a rich picture of life in Ernest Thornton’s house in Waterford, an existence rife with tension. Chandler recalled: “My uncle was a man of evil temper… (I remember)the terrible scenes in the dining room when a particular dish didn’t suit. He would order it removed and sit in stony silence three quarters of an hour while the frantic housekeeper browbeat the servants downstairs and another meal was prepared … this was usually much worse than the one he had refused. But I can still feel the silence.”

It’s intriguing to imagine the effect these tensions must have had on the young Chandler - a child whose life had been uprooted by the loss of father and home. Although Chandler railed against the conservatism of his upbringing, calling his Waterford relations “upper-class snobs,” Long suggested his upbringing had rubbed off on him in certain ways–he didn’t like to be called “Irish-American” as this to him implied “Roman Catholic” and “working class”. Chandler also suggested that his upbringing was perhaps reflected in his character California private detective Philip Marlowe’s “moral code” and “inner arrogance and outer diffidence”.

After completing his education in Dulwich, Chandler wanted to study law, but his uncle wouldn’t pay his university fees. Instead, he was bound for the civil service where he quit after six months, unable to countenance deference to managers his upbringing had taught him were his social inferiors. After fighting in France in the first World War, he wrote short poems and reviews before moving back to America and getting a job in an oil company in Los Angeles. The job lasted until the Great Depression struck, and his volatile behaviour and drinking made him an easy target for lay-offs. It was only in his 40s that he began writing for the dime magazines he had read while travelling up and down the Pacific Coast. His first novel, The Big Sleep, was published in 1933. Success followed, and a series of novels such as Farewell, My Lovely (1940), The Little Sister (1949), and The Long Goodbye (1953). He worked also as a screenwriter on Oscar nominated films like Double Indemnity (1944) and The Blue Dahlia (1946).

Struggling with alcoholism all of his life, Chandler’s health deteriorated after the death of his wife Cissy in 1954. By the time he and Long met in 1958, he was in his final decline, but had not lost the bombastic wit found in lines like: “It was a blonde. A blonde to make a bishop kick a hole in a stained-glass window.”

Although his books were hugely successful, his critical reception was mixed during his lifetime. But his novels have stood the test of time, largely due to their lyrical tendencies, their rich sense of place, and the complexity of the Philip Marlowe character. It’s intriguing to see how his chilly Anglo-Irish upbringing came to flavour the attitude of the “all-American” private detective.

Despite the austere nature of his Waterford family, Chandler remembered the city with fondness to Long, commenting on Power’s Bookshop, and even outlining the potential plot of a Philip Marlowe novel that had the gumshoe roaming the back lanes of Waterford on the hunt of a killer. Long remembers a quip Chandler made on a last lunch they spent together in London before Marlowe’s death, while asking a waiter to take a dish away - a move that ironically invokes the ghost of Chandler’s long-departed uncle and his finicky appetites: “Take it away please, Bernard. It must’ve been dead for a few days before they killed it”.

Chandler may have left Waterford, but his upbringing never left him.