Migration has been a brain gain for Ireland in recent decades 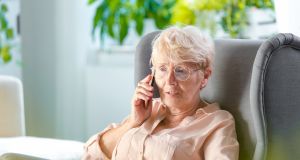 ‘Whatever the marvels of technology, you can’t hug over Skype or Zoom.’ Photograph: iStock

For more than 200 years, migration has played a huge role in Irish life. Between 1820 and 1970, heavy emigration was the dominant pattern. By the end of the 19th century almost 40 per cent of the Irish-born population were living abroad, a quarter in the US and one in ten in Britain.

A century on, the picture is rather different. In 2011, 80 per cent of those born in Ireland were then living here, 14 per cent in Britain, 2 per cent in the US, with 4 per cent spread over Canada, Australasia and the EU. More of us find jobs at home, more emigrants return after experience abroad, and Britain has replaced a more restrictive US as the main destination.

Our long chain of continuous net outward migration was first broken in the 1970s, when, as our economy improved, emigrants returned. Net emigration resumed in the 1980s as the economy struggled. Then, as prosperity took hold from the mid-1990s, net immigration has become the norm, except for the post-crash years 2010-2014.

Likewise, those who have come to live in Ireland since the mid-1990s have largely consisted of the highly educated, particularly those from the EU-15 countries, the US and Asia. This has created much more diverse society than we had during all the decades of largely one-way emigration.

The overall balance, in Ireland’s favour, has been a brain gain – in the past decade, we have had net immigration of more than 100,000 graduates, and net outward migration of 50,000 less well educated.

The latest CSO figures show that over the past decade 380,000 Irish people emigrated while 250,000 returned. In the past, emigration was driven by poor economic performance in Ireland, However, over the period 2013 to 2019, when the economy was growing very rapidly, almost half of the cohort of young people in their mid-20s emigrated and two-thirds of them subsequently returned.

Following on a pattern that developed in the 2000s, in many cases young people are going abroad for a year or two after they graduate to gain experience or see the world. Between 2001 and 2011 the Irish population in Australia rose from 50,000 to 80,000, as many of these temporary emigrants worked there, but it has tended to stabilise since then as most of those who go eventually return to Ireland.

The Irish who return to Ireland from abroad constitute two broad groups, families and young singles. About a third of the returners are families with children – in fact about 15 per cent of Irish immigrating are children – and their ages suggest that the decision to return may be triggered when children are due to start school. Over half the returners are young adults without dependants, who may have spent a limited period working, studying or travelling abroad.

The net effect of these patterns of migration is that almost half of Irish adults aged below the mid-30s have lived abroad for at least a year. That is also contributing to a more cosmopolitan outlook in modern Ireland. While the positive economic effects of the new migration flows have been documented, there is little research to date on the wider effects of having a high proportion of the Irish-born population who have lived abroad.

While this year migration flows are probably dramatically down due to the pandemic, the travel restrictions are also causing hardship to those like ourselves with children or grandchildren abroad, and those who have elderly parents back in their home countries. Whatever the marvels of technology, you can’t hug over Skype or Zoom.